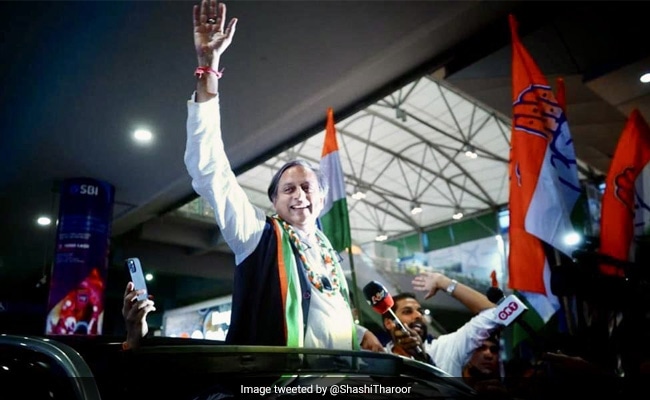 Congress presidential candidate Shashi Tharoor on Saturday claimed that youngsters and people in “lower levels” of the party are supporting him, while seniors are backing his rival Mallikarjun Kharge.

He also asserted that no Congress president can function keeping a distance from the Gandhi family as their DNA runs through the party’s blood.

“I am getting support from the young voters. I am getting good feedback from the lower levels. The seniors are going with Kharge. We have been talking about change and older people resist it,” Tharoor told a press conference as part of his campaign trail here.

While conceding that many party office bearers have been campaigning for his rival candidate openly, he pointed out that the election will be held through secret ballots and weightage of the vote of a senior leader and a lower rank member is the same.

“It would be foolish on the part of any Congress president to distance himself from the Gandhis as the Gandhi family is popular and their DNA runs through the party’s blood,” the Thiruvananthapuram MP said.

He said that the new Congress president will continue to work together for strengthening the party and his priority will be to form a united opposition to reduce the division of votes.

“We should work to form a national ‘gathbandhan’ (alliance). If it is not possible at the national level, we have to explore state-wise,” the diplomat-turned-politician said.

If he is elected, he said, decentralisation of power and bringing about change by introducing younger blood in the leadership will be at the core of his term.

“Many colleagues had left the party for various reasons. During my term, no one will leave due to neglect,” he added.

Tharoor said he toured 11 states during his campaign, and Assam is the lone state in the North Eastern region due to paucity of time and ‘resources’.

He also maintained that Rahul Gandhi’s Bharat Jodo yatra and the party presidential election have created tremendous traction for the Congress.

“The Congress had not got such media attention in the last eight years as we have got since the announcement of the presidential election,” Tharoor added.

The Thiruvananthapuram MP is pitted against veteran Congressman Mallikarjun Kharge for the polls to the party’s highest post scheduled for October 17. The election result will be declared on October 19.

After Mother Dairy, Amul Hikes Price Of Milk By Rs 2 Per Litre

"Law Is A Means To Forge New Future Based On...": Justice DY Chandrachud

Omar Abdullah On Holding Polls In Jammu And Kashmir