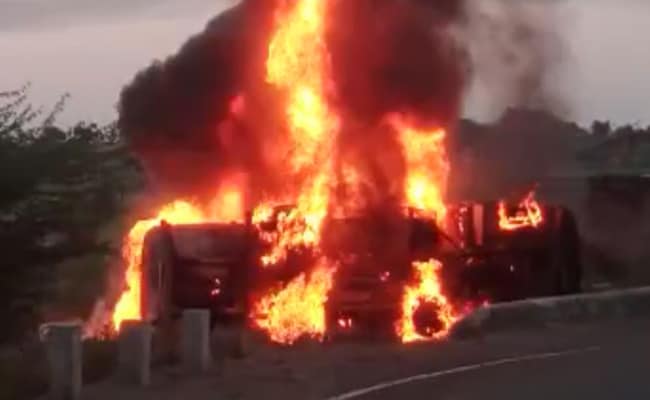 One of the injured persons said a blast occurred in the tanker after it overturned.

A woman was killed and at least 23 other people were injured when a fuel tanker caught fire after overturning near a village in Madhya Pradesh’s Khargone district today morning, officials said.

Superintendent of Police Dharmveer Singh while quoting locals said people from Anjangaon village had gathered to look at the tanker after it overturned near the village. The vehicle then suddenly caught fire causing the casualties, he said.

One of the injured persons said a blast occurred in the tanker after it overturned.

The incident took place at around 5 am near Anjangaon village under Bistan police station limits, about 30 km from the district headquarters, police said.

Khargone Collector Kumar Purushottam told reporters that one person was killed and at least 23 others suffered burn injuries in the incident which occurred after the tanker of the Bharat Petroleum Corporation Limited (BPCL) overturned.

The deceased was identified as Rangubai (19), he said.

Some of the seriously injured persons were referred to Indore for further treatment, he said.

The collector also said that BPCL officials have been asked to conduct an inquiry into the incident.

Jagdish, who was among those injured in the incident, said a blast took place suddenly in the tanker when the villagers reached the spot after the vehicle overturned.

The tanker driver and conductor fled from the spot, he said.

Anjangaon resident Ghurmul Sisodia said the fire broke out suddenly in the fuel tanker when the villagers went to the spot to look at it.

5 Stuffed Potato Snacks For A Crispy And Masaledaar Treat