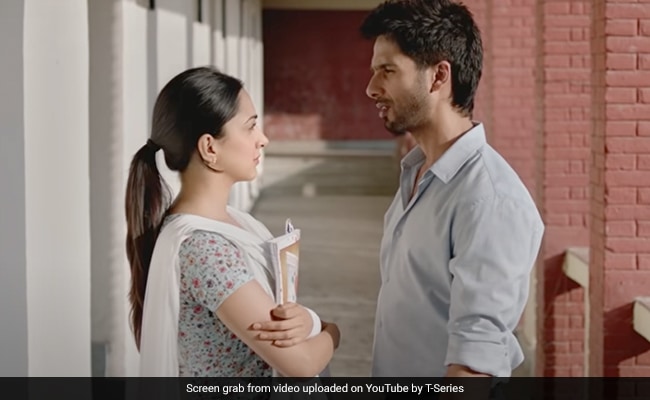 Kiara and Shahid in a still from Kabir Singh. (courtesy YouTube)

Kiara Advani and Shahid Kapoor, who were Karan Johar’s new guests on Koffee With Karan 7, talked about their film careers, personal lives and more. During the ‘Koffee Bingo’ round, there was a question if they have ever b****slapped their co-star. Kiara Advani’s answer was Shahid Kapoor. Kiara said that in her head, she “b****-slapped Shahid as she had to wait because a discussion was going on about which shoes he should wear in the next scene. “It was my third or fourth day of shooting, and I was made to wait for eight hours because there was discussion of what shoes Shahid would wear in the next scene. If I were made to wait for 8 hours for a discussion on shoes, I would b**** too,” Kiara said.

Kabir Singh, which was flagged for its toxic and misogynistic view of romance, released in theatres in 2019. It’s a remake of the popular Telugu movie Arjun Reddy that originally featured Vijay Deverakonda and Shalini Pandey. Kabir Singh was one of the biggest hits of 2019.

Before the Koffee With Karan 7 episode aired, Kiara and Shahid shared a video, in which the actors can be seen recreating a scene from their 2019 hit Kabir Singh. In the video, Kiara can be seen fixing her hair as she looks into a mirror held by a few crew members. Enter Shahid Kapoor (aka Kabir) and he yells, “Kisne touch kiya (who touched her).” He later says “Preeti” and both Kiara and Shahid can’t help but laugh out loud. “

Sunny Deol And Dulquer Salmaan's Chup To Release On This Date

Viral: Adorable Toddler Serving Dosas To His Mother Will Win Your Heart

Shanaya Kapoor Says “There Is A Shade Of Blue For Every Girl.” BFF Suhana Khan Reacts

A Page From Alaya F’s Yoga Diaries. She Keeps Getting Better