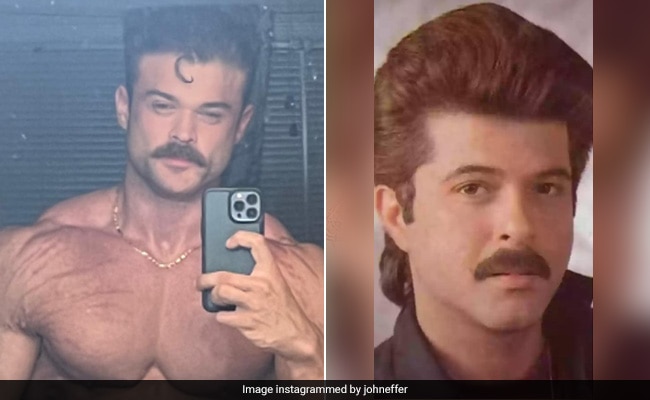 Anil Kapoor was the talk of the town last month, courtesy his doppelganger from the US. A photo of the Bollywood actor juxtaposed with that of his lookalike trended on social media. Why wouldn’t it? John Effer, a bodybuilder, bears an uncanny resemblance to Anil Kapoor. But ever wondered what was his reaction after seeing Anil Kapoor’s picture for the first time? He was “taken aback.” In a post by Humans of Bombay, John Effer said that he got to know about Anil Kapoor after a friend of his shared a picture of the 65-year-old actor on the Internet. “I’ve heard that there are at least seven people on Earth who look exactly like each other. And, I didn’t believe what I heard until recently, a fan of Indian actor, Anil Kapoor, sent me his picture on the internet. And, looking at Anil Kapoor’s picture for the first time, I was taken aback; our resemblance was uncanny,” he said.

John Effer still “can’t believe” how two people living far away, leading “completely opposite lives” can look “so similar.” He said, “I can’t believe how 2 individuals, residing in different parts of the world look so similar and yet, lead completely opposite lives. I’m a passionate bodybuilder back home who helps people find joy in being healthy and fit and Anil Kapoor helps people find the best kind of joy through entertainment.”

This isn’t John Effer’s first experience involving Bollywood stars. He was introduced to Hindi films at a young age. “Although I’m from the US, I’m familiar with Bollywood. My parents enjoy learning about different cultures and so, they introduced me to Bollywood at a young age. Bollywood films were a beautiful escape…the cinema is so wholesome!” said John Effer.

So, what made John Effer share a collage featuring himself and Anil Kapoor on social media? Let us tell you, it has a Hrithik Roshan connection. The bodybuilder said, “I grew up watching Shah Rukh Khan and Hrithik Roshan’s movies and found myself relating to Hrithik Roshan’s character from Kaho Naa… Pyaar Hai when he sees the picture of a man who looks exactly like him (Hrithik plays a double role in his debut film). And so, I decided to post a picture of Anil Kapoor and myself together on my social media to get a sense of what the public thinks.”

The response John Effer got was overwhelming – his phone continuously buzzed with Instagram notifications and many thought he was the “real Anil Kapoor.” All this gave him an idea of what “Anil Kapoor goes through on a daily basis.”

John Effer said, “My Instagram account didn’t stop buzzing with notifications; people commented ‘Bodybuilder Anil Kapoor!’ Some people mistook me for being the real Anil Kapoor and praised me for my acting! I was overwhelmed with the messages I received but frankly, I find it unimaginable to fathom what Anil Kapoor goes through on a daily basis with the spotlight on him every second” and stated the obvious: “But I get why he is so beloved; his cool swagger and style is such a pleasure to watch on screen.”

After this, he decided to binge-watch Anil Kapoor’s films. He even danced to the actor’s iconic song My Name Is Lakhan, from the film Ram Kahan, with his girlfriend. “My favourite is Virasat. I’m also absolutely mesmerised by – ‘One two ka four, four two ka one, my name is Lakhan!‘ My girlfriend and I have a ball dancing to that song,” continued the doppelganger.

John Effer has not officially signed a Bollywood film yet but it “would be a dream come true” for him to act in one. “In fact, I feel Bollywood must make a Kaho Naa… Pyaar Hai: Part 2 with Anil Kapoor and I,” he said.

He concluded, “I don’t know if I’ll ever meet him down the road, but in a way, I feel I know him already, and now I only have one desire — to live a life as jhakaas as his.”

Photos of Anil Kapoor and John Effer took the Internet by storm last month. The bodybuilder had shared this picture collage with a filmy caption. It read: “I’m waiting on that Bollywood call TBH. Where is it at all, Anil Kapoor? Kids a great actor – my dad says so.”