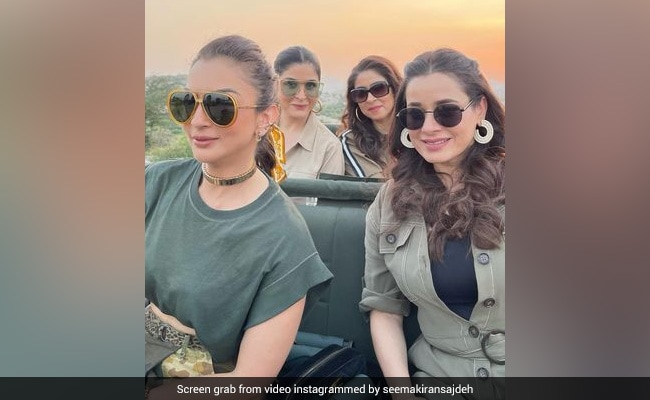 A still from the video. (courtesy seemakiransajdeh)

If you thought the first season of Fabulous Lives Of Bollywood Wives was fun, the second season seems to have raised the bar – at least, that is what the teasers suggest. In a new video shared by Seema Sajdeh, who forms one part of the quartet, the Bollywood wives are on a jungle safari. The clip features Maheep Kapoor, Neelam Kothari Soni, Bhavana Pandey and Seema Sajdeh travelling in a jeep with a guide. The clip begins with the guide – who is also driving the jeep – stating that they have to head back immediately. The camera then turns towards a leopard lazing on an adjoining rock, sending the four women into a state of panic.

While Maheep Kapoor and Bhavana Pandey seem more in control of their emotions, Seema Sajdeh and Neelam Kothari are seen crying out for help. While Seema resorts to chanting loudly, Neelam is seen holding on to Seema while screaming, “I wanna go, Mumma.”

Sharing the video, Seema Sajdeh wrote, “Heaven or hell. Did I chant my way through or roar back? Catch us for all the drama and a whole lot of ‘crazy’ on the 2nd of September only on Netflix.” Director-choreographer Farah Khan wrote, “This hamming.”

In a previous video shared by Maheep Kapoor, the four friends are seen on a yacht dressed in traditional Indian ensembles. Even after leaving the wedding, Maheep is seen watching the ceremony and keeping an eye on the guests from the yacht with her binoculars.

nifty bank: Nifty Bank outperforms; SBI only one to end in red

Nothing To See Here. Just Rashmika Mandanna Dancing To The Hic Song

“Any Criticism Is Just Jealousy”