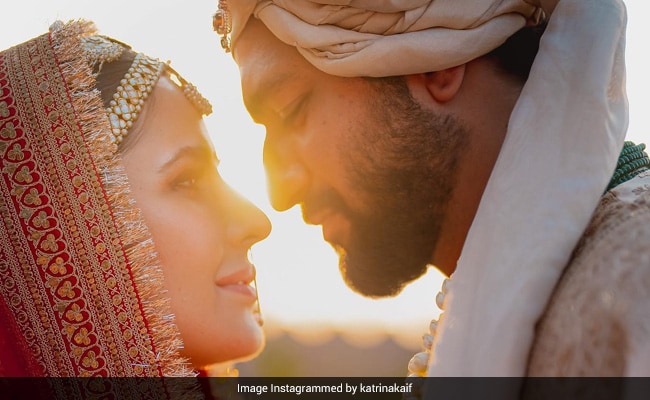 Katrina Kaif, who got married last year to Vicky Kaushal in an intimate yet lavish wedding, has finally opened up about her marriage and the reason behind her hush-hush wedding. In an interview with Zoom, she said that more than keeping it private, they were restricted by the COVID-19 pandemic. “I think more than trying to keep it private, we were restricted by, unfortunately, Covid. You know my family has been personally affected by Covid and it was something that you had to take seriously,” Zoom quoted the actress saying.

Katrina Kaif added, “I think this year it’s been a lot better but it was something that we wanted to really be cautious of, but the wedding was beautiful. I think we are both very happy.”

Katrina Kaif made a stylish appearance at the 67th Filmfare Awards. It was the first time the actress appeared on the red carpet after the pandemic. For the event, the actress opted for a shimmery green saree and accessorised her look with statement earrings. The actress left her hair loose and sported natural makeup.

Recently, on Koffee With Karan 7, Karan Johar revealed that Vicky Kaushal and Katrina Kaif met for the first time at filmmaker Zoya Akhtar’s house after Katrina said that she would look good with Vicky on screen. Well, it happened so, back in 2018, during an episode of Karan Johar’s talk show Koffee With Karan 6, Katrina said that she would “look nice” with Vicky Kaushal on screen. Vicky Kaushal appeared to faint when he was told about Katrina’s statement during the show. Recalling the incident, Vicky said, “Whatever happened last season on this couch, it was really my moment to know that she even knew I existed. We had never met before that.”

Meanwhile, on the work front, Katrina Kaif is gearing up for the release of Phone Bhoot, starring Ishaan Khatter and Siddhant Chaturvedi. She also has Tiger 3 with Salman Khan and Merry Christmas with Vijay Sethupathi.

It's Pool O'Clock For Karisma Kapoor. See What She Posted

Arjun Kapoor Is Here With A Dose Of Weekend Fitness Motivation