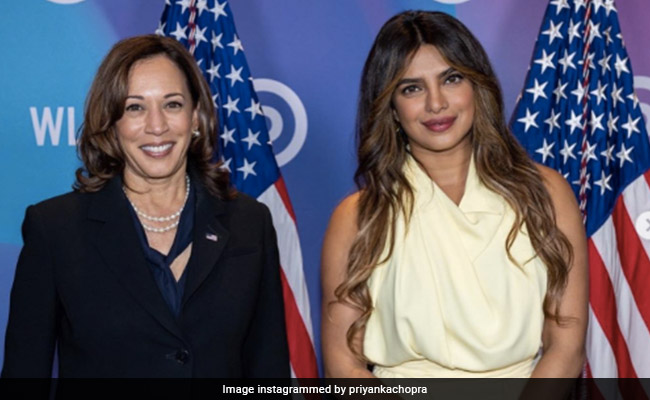 United States Vice President Kamala Harris and Indian actress Priyanka Chopra shared a stage past week, reflecting on their Indian connections, marriage equality and climate change. Priyanka, who is now settled in Los Angeles, was invited by the Democratic National Committee’s Women’s Leadership Forum to interview the Vice President for a fireside chat. The Indian actress kicked off the fireside chat with their Indian connection. “I think we’re both daughters of India, in a way,” Priyanka told the room full of prominent Democrats invited for the conference from across the country.

“You’re a proud American-born daughter of an Indian mom and a Jamaican father. I am an Indian born of two physicians as parents and a recent immigrant to this country who totally still believes in the wholehearted, you know, American Dream,” she said.

The United States, she said, is regarded as a beacon of hope, freedom, and choice for the whole world. “And these tenets are being endlessly assaulted right now,” she said.

Priyanka said after working for over 20 years, it was only this year that she got pay equal to male actors.

The actress also touched upon the issue of marriage equality.

Kamala Harris acknowledged that right now they are living in an unsettled world.

“I’ve been travelling around the world as Vice President. I’ve directly talked with 100 world leaders in person or by phone,” she said, adding “things that we long took for granted are now up for debate and question”.

“You look, for example, at Russia’s unprovoked war in Ukraine. We thought it was pretty well settled–the issue of territorial integrity and sovereignty — and now that is up for some debate, given what’s happening there,” she noted.

“We look in our own country. We thought, surely with the Voting Rights Act and all that it stood for, we assumed and thought the issue of voting rights in America was settled,” she said.

“Then we had the Shelby v. Holder decision. And then after the 2020 election, when more people voted and more young people voted than ever before, states around our country started systematically and intentionally making it more difficult for people to vote,” Harris said.

“We thought a woman’s right–a constitutional right–to make decisions about her own body was settled. No longer,” said Kamala Harris.

Agreeing with her, Chopra said, “Absolutely. You’re so right. There’s so much to navigate right now.” Chopra also touched upon the climate change issue as she acknowledged the relief efforts in hurricane-hit Florida.

“Extreme weather conditions like this are becoming more frequent and more severe. And I wanted to acknowledge the administration for passing the biggest climate legislation in history earlier this year because it is a fact that America’s leadership sets an example to other major economies around the world, which are truly dragging their feet when it comes to doing their bit,” Priyanka said.

“The crisis is real, and the clock is ticking. And the urgency with which we must act is without any question,” Harris responded stressing on adapting to extreme weather conditions.

“On the point that you made about disparities, you know, back when I was the district attorney of San Francisco, I started one of the first environmental justice units of any DA’s office in the country focused on this issue,” she said. “As you have described rightly, which is that it is our lowest income communities and our communities of colour that are most impacted by these extreme conditions and impacted by issues that are not of their own making,” Kamala Harris said.

How To Make Fried Food Healthier - Easy Tips And Hacks