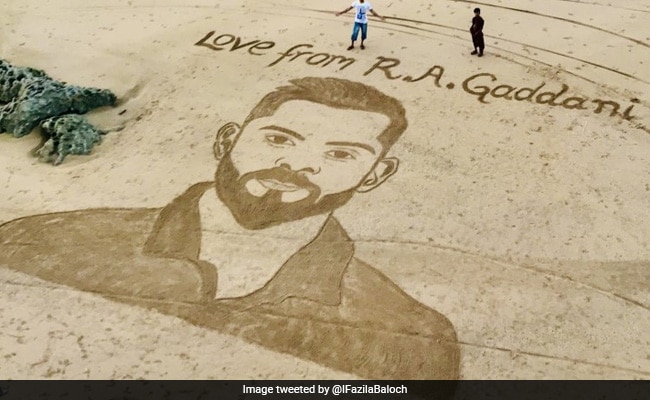 The Indian batting superstar Virat Kohli is admired by millions of cricket fans throughout the world, particularly in the Indian subcontinent, where the sport has become an obsession. After the right-handed batter’s impressive performances in the current T20 World Cup, Kohli, who was already popular in Pakistan, has helped him establish a unique niche among supporters on the other side of the border.

At a time when Pakistani cricket supporters are understandably devastated following their team’s loss to India last week, as a tribute to Kohli’s magnificent batting, a fan from the Pakistani province of Balochistan made a sand artwork of him.

A fan of Virat Kohli @imVkohli, from Balochistan made this amazing portray of #ViratKohli𓃵 using sand art to show his love for the greatest cricketer of our time. pic.twitter.com/GlHvI7ALwA

According to Pakistan’s sports news website, Cricket Pakistan, Virat Kohli was drawn on the sand by an artist in Gaddani, Balochistan, to convey his admiration for him.

In a T20 World Cup encounter against Pakistan, Virat Kohli produced a spectacular unbeaten 82-run knock to lead India’s chase of 160 runs and aid the team in winning by four wickets.

Virat was praised for the knock by people from all across the world.

He continued his outstanding performance against the Netherlands and hit another fifty, driving India to an outstanding victory.

Meanwhile, after winning their first two matches of the ongoing T20 World Cup, Team India will look to maintain momentum and keep marching ahead. The Rohit Sharma-led side will come up against South Africa in a Super 12 Group 2 match on Sunday, and the game will be played at Optus Stadium, Perth. It will be interesting to see whether Team India makes any changes to their playing XI or not. There have been calls for Rishabh Pant to be included in the side in place of out-of-form KL Rahul, but on the eve of the match, batting coach Vikram Rathour made it clear that Rahul will be persisted with.