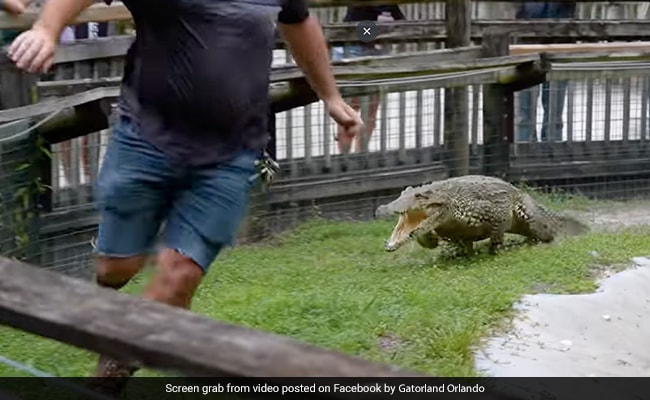 A hair-raising video of a Cuban crocodile galloping towards a man in an enclosure has surfaced online. The short clip was shared on Facebook by a theme park and wildlife preserve in the United States. Uploaded on August 18, the video has already accumulated nearly 1.3 million views and more than 7,500 likes.

According to the social media post, the short clip features the crocodile named Chainsaw. The huge reptile was recorded running rapidly around his enclosure in Gatorland Orlando. “CHAINSAW IN ACTION. Our Amazing Cuban Crocodile!” the caption read.

In the clip, a man, who is also in the enclosure, was seen running away from the crocodile.

“As a Floridian, this might be the most terrifying thing I’ve ever seen,” wrote one user in the comment section. “Wow … I have never seen a gator actually almost gallop run.. Amazing!” added another.

A third said, “I can’t stop watching this! Incredible and frightening at the same time!” “The stuff from which nightmares are made!” commented fourth.

A Facebook user even explained, “Gators ambush predators and have the ability to move really fast but only for a short amount of time. So don’t expect them to stalk you for very long or at least on land. They conserve energy first and foremost.”

Meanwhile, according to Newsweek, Cuban crocodiles typically grow up to 10 feet long. Even though they have short legs, the species can run at speeds between 15 to 22 mph. They can cover up to 100 feet when they run, but as they tire easily they do not hunt this way.

Iran Guards General Killed "On A Mission In Syria": Report

After Kartavya Path, Will Raj Bhavans Be Renamed Seva Bhavans?