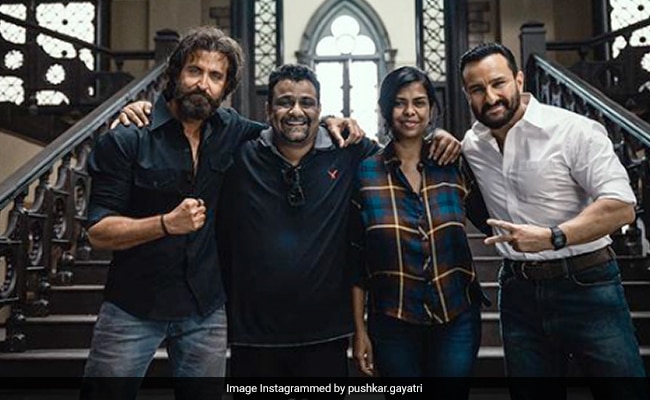 Director duo Gayatri and Pushkar, who are currently busy promoting their upcoming film Vikram Vedha, recently spoke about the difference between the Hindi and Tamil version of the film. The original film was released in 2017, starring R Madhavan and Vijay Sethupathi in the lead roles, with the same filmmaker duo. The Hindi remake stars Hrithik Roshan and Saif Ali Khan in the lead roles. According to a report in Hindustan Times, the filmmaker duo in a recent media interaction ensured that they have given a fresh touch to the film’s remake.

Talking about the difference and comparisons, filmmaker Pushkar said, “Take a play like Streetcar Named Desire or Death of a Salesman. It has been staged hundreds of times all over the world. The text remains the same. But you bring in a fresh set of actors when a production changes. We approached the idea of doing Vikram Vedha the same way. The text is the same, what we had written long back. When Saif and Hrithik come on board, they are bringing what an actor and the written word together form into a character on screen.”

Filmmaker Gayatri added to it and said, “We never felt like we were recreating a scene. We had long discussions on sets on how to do this scene or that scene. And not once did we think of doing it the way it was earlier. The soul is the same but it’s completely different.” The Hindi version of the film is set in Lucknow unlike the Tamil version, which is set in Chennai.

Actor Hrithik Roshan, who is playing the role of Vedha in the film, also added to the subject. He said, “There were times when we got stuck in a scene. We wondered how we could get from this beat to that one. The movie has already been made. We could easily have gone back to it and seen how they did it there and done the same. But that’s not how we were approaching it. We were trying to portray Vikram as Saif has played him and Vedha as I played him. We were actually creating new, not recreating.”

Vikram Vedha, which is a cat-and-mouse chase thriller between a gangster and a cop, is loosely based on the folk tale Vikram Betal.

The Hindi version of the film, which is all set to release on 30 September, also stars Radhika Apte, Rohit Saraf and Yogita Bihani in the lead roles.

Maheep Kapoor Shares Pics “That Speak For Themselves”

“So Happy My Baby Can Experience This,” Writes Ram Charan’s Pregnant Wife Upasana