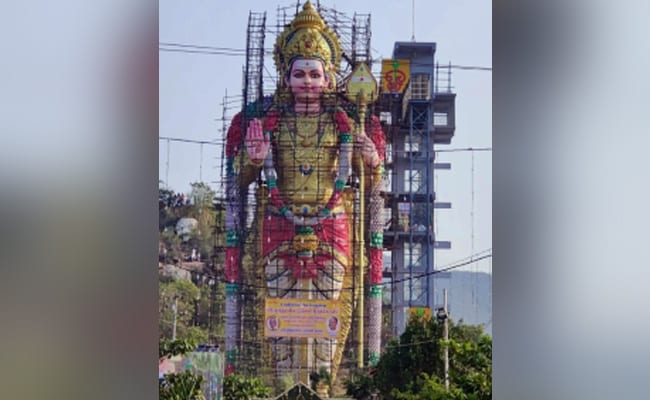 The video gives an aerial view of the statue

A video of the world’s tallest statue of Lord Murugan in the Salem district of Tamil Nadu has caught Norwegian diplomat Erik Solheim’s attention. It gives an aerial view of the statue showcasing its massive dimensions and intricate design.

In the clip, we can also see scores of devotees walking around the statue to seek blessings from the deity. At one point, a helicopter showers rose petals on the idol.

At the time of writing this, the video amassed nearly 74k views on Twitter and drew reactions from users.

Many were left spellbound by the enormous size of the statue as one asked “is that real?”

Some have summarised their reactions in one word.

One user offered a recent picture of the statue.

The Lord Murugan statue stands 146 feet tall and is located on the Salem-Chennai national highway at Ethapur, Tamil Nadu. It was consecrated in April this year.

Earlier, Mr Solheim had shared a drone video of the Himalayas’ highest Shiva temple and was left awestruck by its beauty. The aerial footage captured a 360-degree view of the Shiva temple, which is nestled in the mountains completely blanketed with snow. The video also had the chanting song Namo Namo from the movie Kedarnath playing in the background. “Incredible India. World’s Highest Located Mahadev Mandir.., believed to be 5000 years old! Uttarakhand,” the diplomat wrote.

AAP, The Millennial That Only Knows Vote-Bank Politics