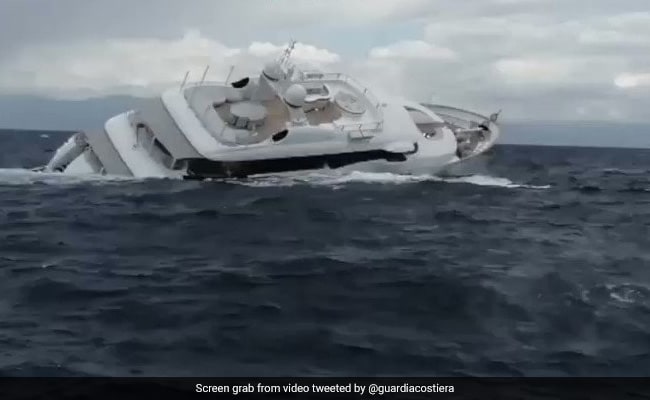 The boat sank 14.5 kilometres off the coast.

A video has emerged on social media that shows a superyacht completely sinking into the Mediterranean Sea. It has been posted by the Italian Coast Guard on Twitter and shows the 130 feet boat going under water. According to the BBC, the Coast Guard rescued all nine people on board – four passengers and five crew members. It further said that the boat was heading from Gallipoli to Milazzo when it sank. An “administrative investigation” has been launched to find out the cause, according to a translation of the Coast Guard’s tweet.

It also posted a statement on Facebook, which said that worsening of the weather and sea conditions meant the yacht sank in a short time and was unable to be retrieved from the sea.

The Daily Mail said that the boat was named ‘Saga’, which was built in Monaco in 2007. It further said that the incident took place on Saturday night about 14.5km from the coast.

After receiving a distress call, the Coast Guard dispatched a tugboat to tow the vessel in distress back to port safely. The rescue operation began, but the ship started listing heavily to starboard, the outlet further said.

The Coast Guard officials said that the yacht’s stern disappeared beneath the waves and water reached her roof-line. Looking at the condition of the boat, the rescuers stopped towing the vessel as it went nose-up into the air and began to sink rapidly.

The superyacht sank around 1pm on Sunday.

The authorities are now trying to find the reason behind the vessel’s sinking. They are also analysing the footage, according to the Italian Coast Guard.