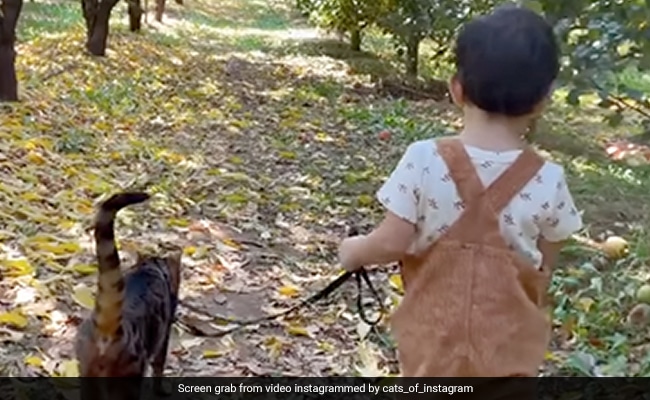 Picture shows a little boy taking a stroll in an apple orchard with a cat.

Videos of children having fun, especially with animals, are in abundance on the internet. Their simplicity and innocence are the epitome of pure love. These are the perfect videos to watch if you’re having a bad day or if you want to uplift your mood. One such video that has surfaced on the internet shows a little boy taking a stroll in an apple orchard with a cat.

The video has been shared by an Instagram page named Cats of Instagram. “Apple picking,” reads the caption. According to the post, the cat’s name is Kazuki.

In the video, the boy and Kazuki can be seen strolling through the apple orchard and stopping to inspect a fruit that has fallen to the ground. Later, both of them are seen climbing a stair that has been placed in the orchard to pluck fruits. Several fruits can also be seen fallen on the ground.

The video has received more than 31,000 likes and 5.9 lakh views since it surfaced on social media. Many individuals left heartwarming remarks in the post’s comment area adoring the video and the pair.

Praising their bond, one user wrote, “So adorable and you can tell they have a good bond.”

“Too adorable for words! I have a Bengal who looks just like this,” commented a second user.

Recently, a video went viral on the internet showing a cat dressed like a haunted doll character named ‘Chucky’ ahead of Halloween.

The video was shared by a user named Don’t Stop Meowing on Instagram with the caption “I can’t stop laughing.”

The pet cat’s name was Chase, and its owner was Ms Kareem, according to the Instagram bio. The video attracted 2.9 million viewers and received more than 2.5 lakh likes after getting posted on social media.

India’s Economy Lights Up This Diwali After Covid Dampener. Here’s Why