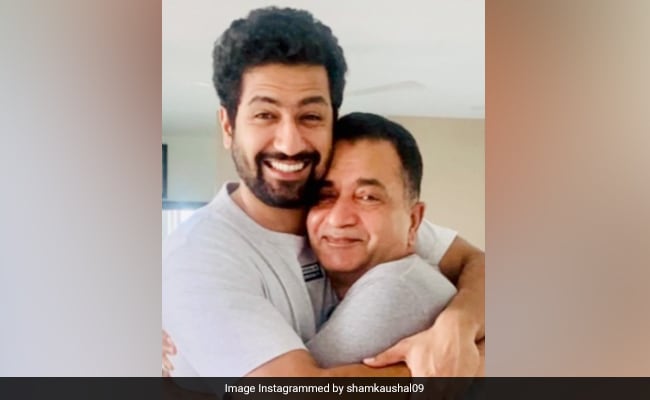 The latest episode of Koffee With Karan 7 was all about the Punjabi boys Vicky Kaushal and Sidharth Malhotra. From discussing Vicky Kaushal’s dreamy wedding to Katrina Kaif to Sidharth Malhotra’s bond with “good friend” Kiara Advani, the actors let their guard down, making for a super fun episode. The two also discussed their entry into Bollywood. While Sidharth Malhotra spoke about making his dream debut with Varun Dhawan and Alia Bhatt – both from film families, Vicky Kaushal spoke about being neither an insider nor outsider in Bollywood thanks to his father, stunt director Sham Kaushal’s association with the film industry.

During the course of the conversation, Karan Johar pointed out that Vicky Kaushal’s name is rarely added to the list of “nepo-kids”. The filmmaker says, “People don’t know whether to slot him [Vicky] as a nepo kid or  not. Because to half the world, it is a lesser-known fact that his dad has been in the business, loved and respected for decades. Even on social media, I’ve read, sometimes you are put on the list of products of nepotism but many call you an outsider.”

Adding that it was Arjun Kapoor who first pointed out that Vicky Kaushal did not fit into either category, the Masaan star said, “Technically yes, I have my father from the same industry as I am in now…He is a technician and it was laid very plainly and honestly to me that ‘I have going to have my own struggles and you have your own struggles. I have been a person who has always been behind a camera. All I know is that when I see an actor performing I just know if he is an actor or not. I don’t know anything about the craft. So you will have to work on that’,” quoting his father.

Vicky Kaushal added that his journey has been that of an outsider to which Karan Johar confirmed that Sham Kaushal played no part in fetching his son his debut film.

Watch the promo of the episode here:

In the episode, Vicky Kaushal also spoke about settling down with Katrina Kaif and how the two fight over closet space. On the work front, he will be seen in Govinda Naam Mera.

Mrunal Thakur's ROFL Pics Of Her Nailing The Shavasana Pose

Asset Managers On Alert After 'WhatsApp' Crackdown On Banks

After Neha Kakkar vs Falguni Pathak Controversy, This Happened

Sonakshi Sinha And Huma Qureshi Promise “A Story Of Friendship”