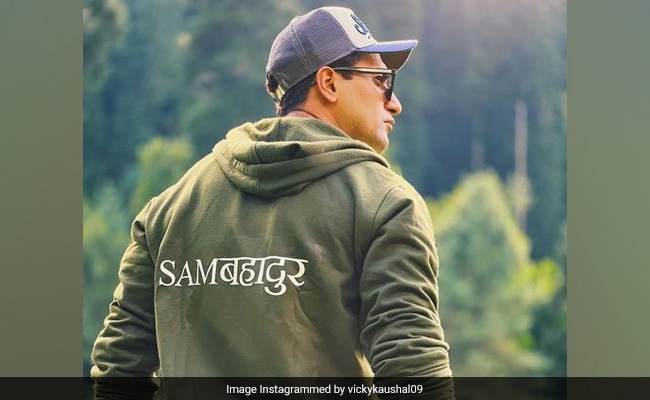 Vicky Kaushal is shooting for his upcoming film Sam Bahadur. On Tuesday, the actor shared a picture of himself on Instagram. In the picture, Vicky can be seen wearing a pullover, which has Sam Bahadur written on its back. The actor shared the picture with a few emojis as its caption – A clapboard, a mountain and a red heart. Vicky’s post has caught filmmaker Mozez Singh’s attention, who dropped good times and celebrations emojis in his comments section. The actor’s post garnered over a lakh likes in less than an hour with many of his fans dropping heart and fire emojis in the comments section. One of his fans wrote, “So so excited” and the other wrote, “Shooting going on strong.”

A few weeks ago, Vicky had shared another post, updating his fans about the beginning of Sam Bahadur’s filming. The actor shared a video featuring filmmaker Meghana Gulzar and Sanya Malhotra among others. His caption read, “Only Gratitude as we set out on this extremely special Journey.#SamBahadur Now Filming!”

On film’s director Meghana Gulzar’s birthday on December 13, Vicky Kaushal had shared a picture with the filmmaker and his co-stars for the film. He wrote, “It’s a very special day for us as we celebrate our director Meghna Gulzar’s birthday and welcome the leading ladies Sanya Malhotra as Silloo Manekshaw & Fatima Sana Shaikh as Smt. Indira Gandhi to the Sam Bahadur family!”

Sam Bahadur, which is being directed by Meghana Gulzar, is the biopic of Field Marshal Sam Manekshaw.

Anushka Sharma Goes On Breakfast Date In England, And It Wasnt With Virat

Arjun And Anil Kapoor, Varun Dhawan Fly Out Together For Holidays

“If Ram Charan Takes Me,” Replied Shah Rukh Khan To This Question On His Twitter AMA

“Proud To Have Called Him My Father-In-Law”