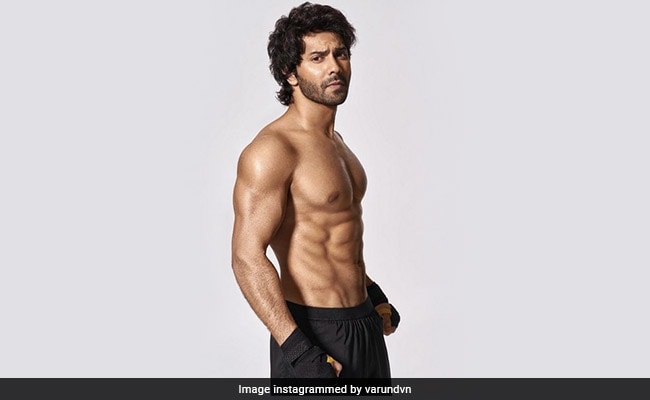 When Varun Dhawan gives fitness tips, you take it. The actor, who is known for his disarming on-screen roles, has an enviable physique. There is no doubt that the star puts a lot of effort into looking his best. Now, on Monday, the actor has shared a few images of himself, flaunting his toned body and six-pack abs. Along with it, he has also dropped a valuable piece of advice. Sharing the images, Varun Dhawan said, “Monday motivation #MCM. Cut down the voice and please eat your carbs.” Responding to the images, his Bawaal co-star Janhvi Kapoor said, “But I’m on keto.” Celebrity hairstylist Aalim Hakim dropped three fire emojis.

A few days ago, Varun Dhawan shared an image with Indian cricketer Shikhar Dhawan and wrote cheekily in the caption, “Dhawans #theones”

Recently, Varun Dhawan sent his fans into a tizzy when he shared a photo with the cast of his last release JugJugg Jeeyo, celebrating the success of the film. In the caption, he wrote, “Thank you for the love, aap sabJugJugg Jeeyo.” Seen with Varun Dhawan in the images are Kiara Advani, Neetu Kapoor, Anil Kapoor and Farah Khan, among others.

Varun Dhawan only recently returned to Mumbai, after travelling across Europe shooting for Bawaal. Upon coming home, Varun shared a video of his pet dog welcoming him. In the caption, he said: “Back home after 45 days and couldn’t be happier to see my boy, Joey. For the last 3 months, I have had literally no time to spend or explain to joey why I was busy promoting JJJ and wrapping Bawaal. This has to be the greatest reward.”

Replying to the post, Saba Pataudi said, “BEST way to get a welcome back.” Zoya Akhtar, Bhumi Pednekar and Diana Penty replied to the post with heart emojis. Elli Avram said, “Omg, this is so cute.”

Varun Dhawan also posted a bunch of images from the Europe schedule of Bawaal. In the caption, he said: “Summer of #Bawaal. In between work I’ve been exploring, observing and sometimes meeting up with European dogs – part 1.”

Varun Dhawan will soon also be seen in Bhediya with Kriti Sanon.

Kapil Sharma’s New Post From Canada Is For Coffee Lovers