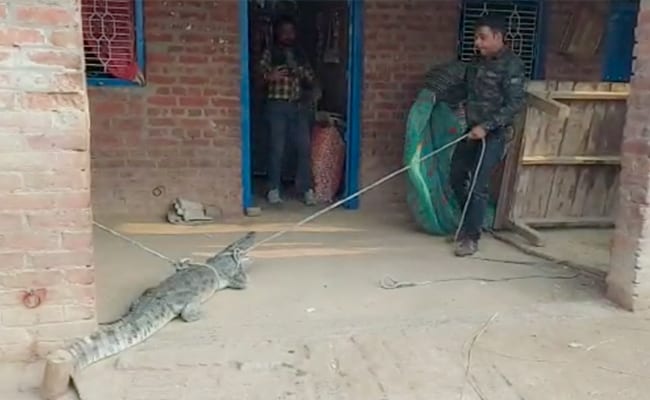 The crocodile was caught with the help of locals and police.

A family in a village in Uttar Pradesh’s Etawah was jolted out of sleep after an eight-foot crocodile entered the house in search of prey. The incident took place in Jaitia village on Saturday night. According to Harnam Singh, the owner of the house, the reptile entered the house at 10.30pm when they were sleeping after which they informed the police. The cops informed a local wildlife expert Dr Ashish Tripathi who suggested to lock the house. The suggestion was duly followed and the family members were awake all night.

As soon as the news spread, locals gathered at Mr Singh’s house. The rescue operation began at 6am under the supervision of Dr Tripathi. It took the cops and the wildlife expert one hour to grab the crocodile in a trap and safely remove it from house. It was later handed over to the forest department.

“We don’t know how it entered the house. When we heard the goats’ bleating at night, we realised something is wrong and found a crocodile,” the owner of the house Harnam Singh said.

“My mother started shouting and hearing her voice, my daughter opened the door of the room and rushed towards her. That’s how the reptile entered the room,” he added.

Mr Singh said they were awake all night and kept talking with neighbours who had gathered.

Dr Tripathi, meanwhile, said the crocodile is a juvenile and not a fully-grown adult.

“We checked the crocodile and found that it is eight foot long. The reptile’s age is between 1.5-2 years. The villagers were very scared but we decided against carrying out the rescue operation at night as this crocodile is very aggressive,” said Dr Tripathi.

He added that the crocodile crawled out from a canal flowing nearby in search of food. “It is a freshwater crocodile and will be released in its natural habitat.”