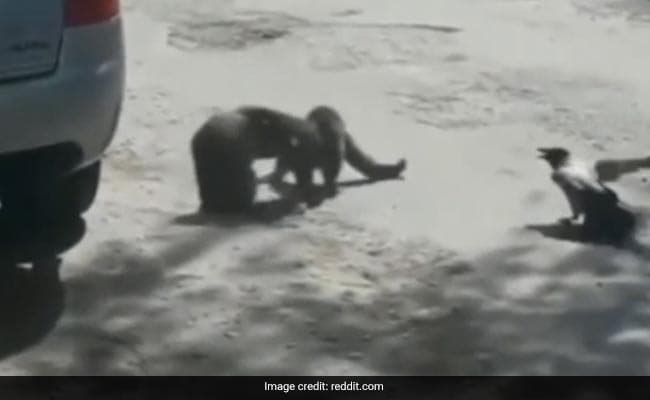 The notorious crow made the most out of the fight.

The internet is flooded with videos of animals and their amusing antics. Like humans, animals too have their own ways of showing their feelings of happiness or anger. In one such video that has gone viral, internet users have been left in splits. The video shows a crow trying to instigate a fight between two cats.

The video was posted on Reddit two hours ago and has garnered the attention of a lot of users. The video shows two cats facing each other when a crow jumps in and pokes one of them. Initially the cat ignores, but the bird does it again. This incites the cat and it jumps on the other cat and gets into a fight. As soon as the two cats stop, the bird comes again, pokes the same cat, making both felines start the fight again. It appears that the notorious crow made the most out of the fight.

Several users had a fun time looking at the video. One user commented, “Bored crows are notorious s*** starters”

A second wrote, “I’m always amazed at how smart crows are. On time we were walking our dogs (two greyhounds and two toy poodles) and some crows were herding a cat toward the greyhounds.”

“Crows are one of the few animals that can do complex tasks such as using tools to acquire another tool to do a task. They also have generational memory and will teach their young to avoid specific people who have harmed or annoyed them in the past. Crows also hold funerals for the dead,” commented a third user.

Video: Beer-Guzzling Monkey Is A Menace For Liquor Shops In UP Town

ICICI Bank revises charges on NRI savings accounts from November 1; check when, what you have to pay

Ireland Upstage England At A World Stage, Yet Again!