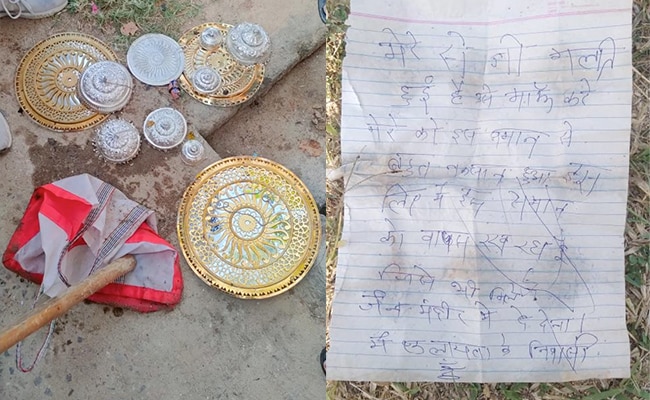 The stolen goods were returned after four days.

A thief in Madhya Pradesh returned all the items he stole from a Jain temple in Balaghat, presumably after a change of heart. He also left an apology note along with the stolen goods. The theft took place in Lamta area of Balaghat town on October 24 when several precious items from the temple were found missing by the locals. They informed the police and a case was registered against unknown persons. The cops started investigation, which included regular patrolling and collection of evidence.

But before any arrests could be made, locals found all the valuable items wrapped in a bag lying in a pit near the temple after four days.

The bag not only contained the loot, but also a note that said, “I suffered a lot after committing the crime and that is why I am returning these items. I apologise for stealing these items.”

The reason for the change of heart is not known.

According to the police, there were nine chhatras and four bhamandals – one made of silver and other three of brass. A Jain family was filling water from a tap installed near the pit when they spotted the bag.

When it was opened, the family members found the stolen items and informed temple authorities. The police were called in and they found the note too.

The valuable items were formally handed over to the temple authorities. Locals were very happy after the discovery of these items.

“We are extremely happy. And there was an apology note too. This shows the God is with us, and miracles do happen,” a local said.

The police, meanwhile, are continuing with their investigation to find out who stole these valuables from the temple.

This Japanese Restaurant Lets You Catch Your Own Fish To Cook; Watch Viral Video

BJP Bihar Chief Ahead Of By-Polls