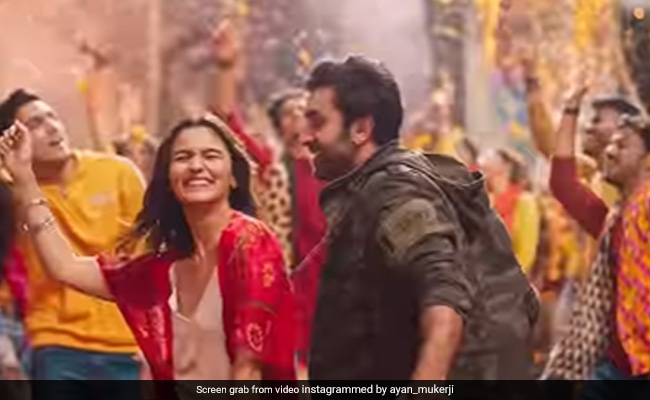 Another day, another update from Ranbir Kapoor and Alia Bhatt’s Brahmastra. This time, the spotlight is on the soulful song Kesariya. But did you know that the makers had earlier created a “dancier, groovier” version of the track? It “wasn’t right for the film,” so, they made a romantic version. Director Ayan Mukerji has revealed it on Instagram. He has shared the Kesariya Dance Mix and wrote, “So…before Kesariya became the song we all know and love today, it was… This.” The track features Alia Bhatt and Ranbir Kapoor dancing their hearts out on the ghats of Ganga in Banaras. Ayan, in the caption, added that the song with upbeat music was dropped as Brahmastra “needed a more romantic” track. “A dancier groovier version of the song! As you can now see, we even shot it. Then I realised that the film needed a more romantic version of the song, the true version of Kesariya was created, I pleaded and convinced everyone to reshoot it… and I thought we would never show anyone this earlier version of Kesariya,” wrote the filmmaker.

Ayan Mukerji continued, “But now – our film has done really well, the festive season is upon us, and while this version of the song wasn’t right for the film… it’s still great fun and we all love it!” and added the full song titled Kesariya Dance Mix will be released this weekend. “So, we’re thinking of having some fun, and releasing it this weekend with the Video we shot! (Shall we?!) Let’s call it… Kesariya… Dance Mix! Brahmastra.”

See a glimpse of the Kesariya dance mix here:

The officially released version of the Kesariya has been sung by Arijit Singh and composed by Pritam. The lyrics have been given by Amitabh Bhattacharya. The track shows the lead character Shiva (played by Ranbir Kapoor) expressing his love to Isha (Alia Bhatt) on the banks of Ganga. Watch it here:

The Internet Can't Get Enough Of This Suriya-Jyotika Moment

John Abraham Is “Tough And Plays It Rough”

Allu Arjun’s Ala Vaikunthapurramuloo Is Trending. Because, Shehzada Teaser