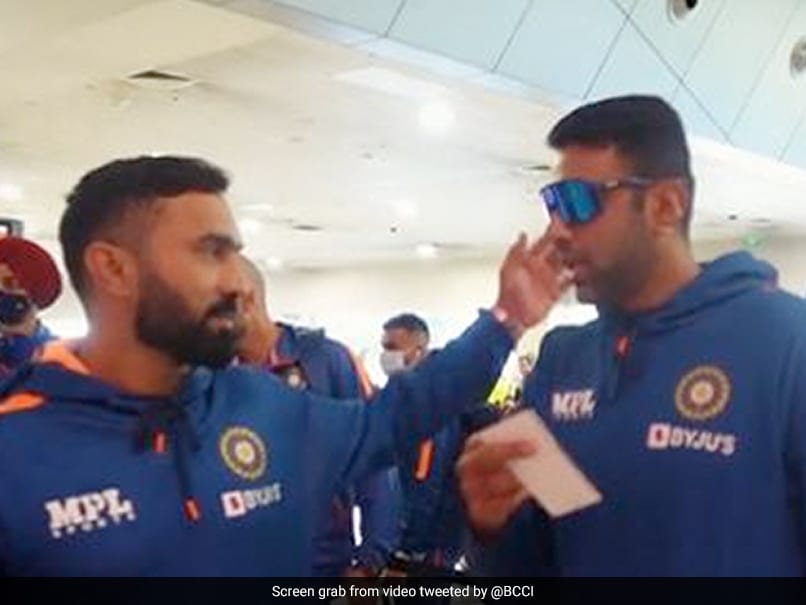 Rohit Sharma-led Team India scripted a famous win over Pakistan at the Melbourne Cricket Ground on Sunday, owing to an unbeaten 82-run knock by right-handed batter Virat Kohli. The winning run was hit by Ravichandran Ashwin as the side needed just one run off the final ball of the over. He hit the ball over the head of mid-on fielder, and as soon as the winning run was completed, Ashwin and Virat Kohli celebrated in style. Ashwin had walked out to bat with Dinesh Karthik being dismissed on the penultimate delivery of the match and the side needed 2 runs of the final ball.

He then calmly allowed the delivery bowled by Pakistan bowler Mohammad Nawaz to slide down the leg side and that led to a wide ball which meant the scores were level. And then on the next ball, he hit the ball over mid-on to help India register a win.

On Tuesday, the BCCI’s official social media handles posted a video of Team India leaving for Sydney for Melbourne where they will play their second match of the tournament against the Netherlands on Thursday.

In the video, Dinesh Karthik thanked Ashwin, saying: “Thank you for saving me yesterday, so cool and calm.”

We are here for our 2⃣nd game of the #T20WorldCup! #TeamIndia pic.twitter.com/96toEZzvqe

The last over was a dramatic one which saw Mohammad Nawaz pick up the wickets of Hardik and Dinesh Karthik, but he also bowled a no ball to Kohli, which cost Pakistan dear eventually.

Speaking about Ashwin’s role and calmness at the end Kohli said that it was very easy for him to get excited but the veteran India player kept his cool.

“When you need 15-16 runs per over, and then the equation comes down to 2 runs off 2 balls, people can get relaxed or over-excited that this target is almost achieved. Then Dinesh Karthik got out, I told Ashwin to hit over the covers. But uss time pe Ash ne dimaag ke uppar extra dimaag lagya (Ashwin used his brain at that point of time). That was a very brave thing to do, he came inside the line and the ball turned out to be a wide. The situation was that if the ball goes into the gap, we will end up winning and that is what happened,” said Kohli while speaking to Star Sports.

sbi: Stay with banks in Samvat 2079; BOB and SBI are likely to witness extended up move: Rupak De

Liz Truss Biographers Ready With Book. She Resigned. What Now?

All You Need To Know