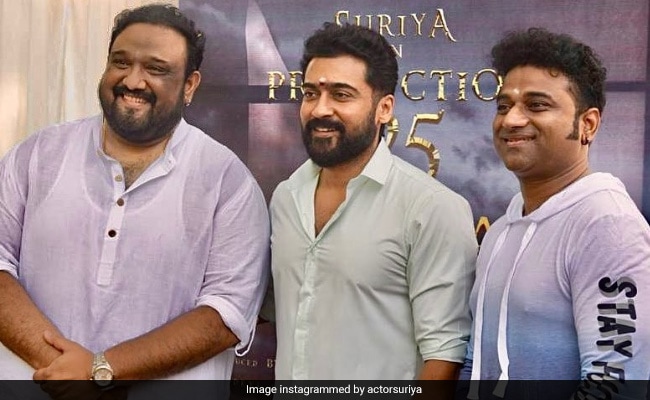 South superstar Suriya has begun shooting for his 42nd project, Suriya 42. On Wednesday, Suriya shared a picture of himself with director Siva and music composer Devi Sri Prasad on Twitter and Instagram. Suriya’s caption read, “Shoot begins..! Need all your blessings..!! #Suriya42” Soon after the announcement, Suriya’s fans flooded his comment section with happy emojis. Many are trending #Suriya42 on Twitter. The mahurat puja for the film was held a few days ago.

Shoot begins..!
Need all your blessings..!!#Suriya42@directorsiva@ThisIsDSP@StudioGreen2@UV_Creationspic.twitter.com/6lSqkVt8t1

Siva too shared the announcement by posting a different picture on Twitter and thanking his fans for their love and support. The filmmaker’s caption read, “”Very happy to start our new project with the blessings of god and best wishes of all the fans, media friends, cinema lovers, and well-wishers. Thank you, Suriya sir, Studiogreen, UV creations. #Suriya42”

There is speculation that actor Disha Patani will make her Tamil debut with Suriya 42, however, the makers haven’t confirmed the news or unveiled the film’s cast yet. Filmmaker Siva along with Aadhi Narayana has written the script for Suriya 42, which is produced by Suriya and Jyothika’s 2D Entertainment.

Apart from Siva’s directorial, Suriya will also be seen in filmmaker Vetrimaaran’s film Vaadivaasal. The film is said to be an adaptation of a novel, which is based on the bull sport, Jallikattu.Vaadivaasal will also mark the first-time collaboration of Suriya and Vetrimaaran.

Suriya is also set to reunite with filmmaker Bala for his film Vanangaan. The actor-director duo has previously delivered hits like Nandha and Pithamagan.

“Every Cell Exploded With Joy”