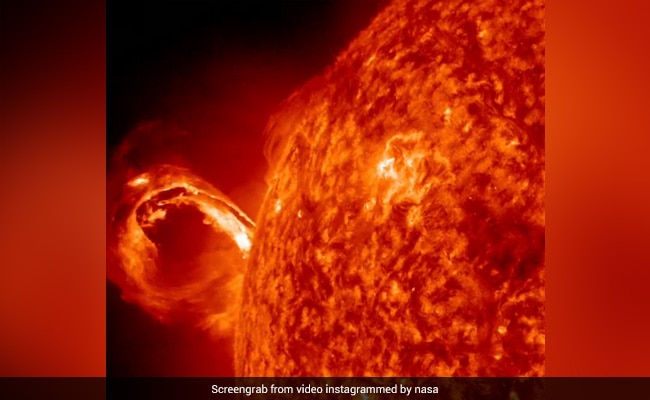 A recent research said the Sun has reached its middle age.

The Sun is the source of life on Earth. It radiates light and heat, or solar energy, which makes it possible for various species to flourish on Earth. But what will happen when the giant star expends all its fuel? This is the subject of a study undertaken by a group of scientists and submitted to the Astrophysical Journal. The scientists have said in the paper that five billion years from now, the Sun will lose all its life-giving powers and become a red giant.

Giving details about the chaos that will follow, the researchers said that our home, the Earth, will meet an ignominious end. They claimed that Sun will devour Mercury, Venus and possibly the Earth.

The researchers performed three-dimensional hydrodynamical simulations to understand a range of outcomes after a planet is engulfed by a Sun-like star. They said that the outcomes depend on the size of the engulfed object and the stage of the star’s evolution.

The researchers clarified that the process of “planetary engulfment” is common in the life cycle of star systems.

“For the case of the Earth, I think it’s rather unclear whether it’s going to be engulfed or not, but it’s certainly going to become impossible to live on,” Ricardo Yarza, a graduate student in astronomy at the University of California, told the New York Times.

In the red giant phase, when the Sun will lose hydrogen, its border will expand hundreds of times over.

The latest research predicted several other outcomes: The planet that is engulfed could be pushed into a new and much tighter orbit and others can help create a new world.

Earlier this month, the European Space Agency (ESA) released the results of a research that claimed that the Sun has reached its middle age, estimated at 4.57 billion years. It also said that the Sun appears to be going through a midlife crisis, with frequent solar flares, Coronal Mass Ejections (CMEs) and solar storms.

Sikh Student With Kirpan Arrested At US University

I Want To Change UK-India Ties To Make It More 2-Way: Rishi Sunak

Queen Elizabeth Saw 16 PMs During Her Reign. Here’s A List