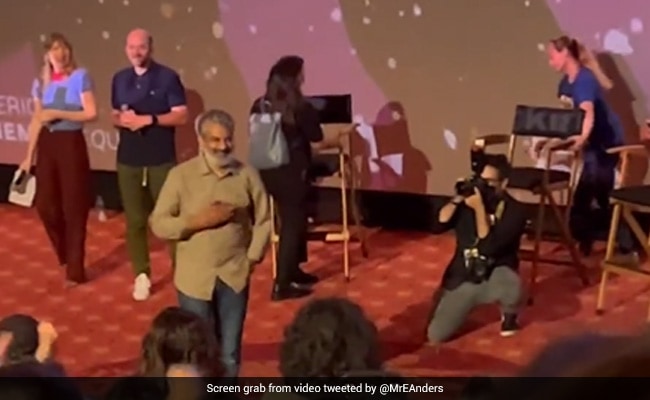 SS Rajamouli’s recently released film RRR is doing wonders on a global stage. Recently, the filmmaker received a standing ovation for his blockbuster film. The film was recently screened at the Chinese Theater in Los Angeles as a part of the Beyond Fest and reportedly received a great response with many standing in a queue to watch the film. SS Rajamouli too was present at the screening. The videos from the event are doing rounds on social media. In one such video, a theater full of crowd can be seen giving a standing ovation to the filmmaker as he enters the theater for the Question and Answers session.

Check out a few videos shared by Twitter users:

SS Rajamouli gets a rapturous, long standing ovation after #RRR at #BeyondFestpic.twitter.com/KGBKlCZeVR

This is the Reaction for Title Card in Los Angeles, In One of the Biggest IMAX Screens @ChineseTheatres#SSRajamouli never stops making Telugite and Indians Proud🥳🥳 #RRRForOscars#RRRMovie@ssrajamoulipic.twitter.com/iL9Wr25kuk

#RRRMovie I did my best to catch all the good stuff in the front row. pic.twitter.com/I1tFeC1Ap6

Another Twitter user shared the video of the long queue of people, who are reportedly waiting to watch the film.

Check out a video shared by the Twitter user:

The official Twitter handle of the film RRR shared another video, where people from the audience can be seen dancing to the song Naatu Naatu in the theater.

p>Check out the video here:

The film tells the story of two revolutionaries and their fight against the British Raj.

The filmmaker is currently working on a project with superstar Mahesh Babu, which he called a “globetrotting adventure.”

Is It Safe For Pregnant Women To Fast During Navratri?