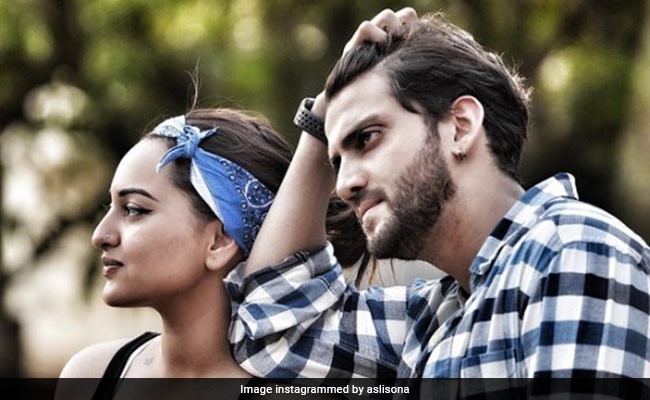 Sonakshi Sinha on Saturday announced a music video with her rumoured boyfriend Zaheer Iqbal. Sharing the teaser of the song in an identical post on their Instagram, the rumoured couple wrote, “BLOCKBUSTER coming soon… tayyar ho?” Her caption was accompanied by the hashtags – Blockbuster, Announcement, Dharma Records, YouTube, Music Video, Sonakshi Sinha and Zaheer Iqbal. The post was soon flooded with many comments. Most of them dropped heart, fire and star-eyed emojis on the actor’s announcement post.

On Thursday, Varun Sharma had shared a picture of the rumoured couple on his Instagram handle. He captioned it, “Oyeeee hoyeeee isey kehte hai blockbuster Jodi,” which he deleted in less than 24 hours. However, the screenshots of his post went viral on the Internet.

Sonakshi Sinha gets spotted with boyfriend Zaheer Iqbal at a plush restaurant in town; Varun Sharma calls them ‘blockbuster jodi’#SonakshiSinha#ZaheerIqbal@varunsharma90#VarunSharma#Bollywoodpic.twitter.com/5b9heUvGlM

Sonakshi Sinha and Zaheer Iqbal, who have maintained that they are “just friends” are often spotted together on many occasions. They also keep sharing pictures of each other on their Instagram handle.

Zaheer and Sonakshi had put birthday posts for each other on their Instagram handles with long captions.

Check out their posts here:

Rashmika Mandanna Is In Delhi, Binging On A Drool-Worthy Feast (Pic Inside)

Priyanka Chopra Is Excited To Return To India “After Almost 3 Years.” See Post

Richa Chadha Shows Off Her Wedding Mehendi At Mumbai Airport