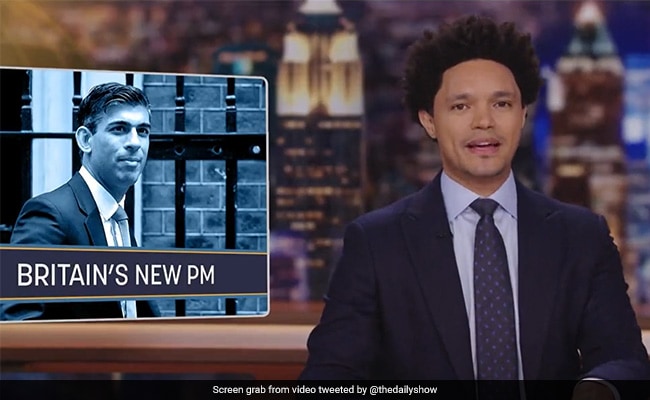 The talk show host added that the British people are looking at it the wrong way.

Comedian Trevor Noah has responded hilariously to British racists who have taken offence to Rishi Sunak, non-white and of Indian origin, becoming the prime minister of the United Kingdom.

Host of The Daily Show, Mr Noah said Rishi Sunak, who is just 42, will probably “serve well into his 42-and-a-halves”.

“Let’s not forget another important first. he is also the first prime minister who is an absolute snack,” Mr Noah said.

The comedian mentioned that not everyone in the UK is happy about Mr Sunak becoming the prime minister. He played a clip from a British radio show in which a caller explained why a non-white person becoming the PM of the UK is not a good thing.

“Can you imagine me becoming Prime Minister of Pakistan? People of England would like to see someone who looks like them,” the caller said.

In a hilarious swipe, Mr Noah sarcastically responded, “This is a good point. Can you imagine white English people trying to rule countries where no one looks like them!”

The talk show host added that the British people are looking at it the wrong way and that Mr Sunak becoming PM is a rather good thing.

“This could be a good thing for you people. After 400 years, you finally get to legitimately blame a brown person for your country’s problems. You’re living the dream!” Mr Noah said.

Gandhis By His Side, Mallikarjun Kharge To Take Congress Charge Today