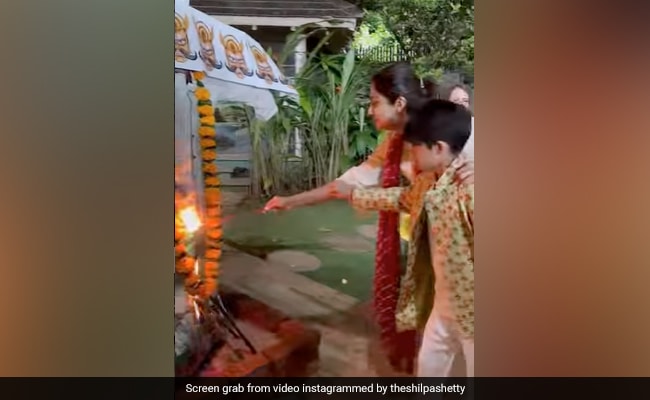 Shilpa’s post caught the attention of her sister Shamita Shetty, who dropped hearts in the comments sections.

Many of Shilpa’s fans too commented on her post. One of them wrote, “Happy Dussehra dear Shilpa,” while the other one wrote, “Stunning.” Many others dropped heart, star-eyed and fire emojis in the comments section.

On Tuesday, Shilpa shared another video. In the video, Shilpa’s husband, Raj Kundra can be seen performing the Kanchika Puja (Ritual of offering prayers to little girls) with their daughter Samisha Shetty. Her caption read, “Kanchika Puja with my in-house Mahagauri (don’t miss the sunglasses) Here’s wishing all of you – my Insta Fam, and all the little Lakshmis a very Happy Ashtami.”

Take a look at a few more posts by Shilpa Shetty from her Navaratri celebrations:

On the work front, Shilpa Shetty was last seen in the film Nikamma. The actor will be soon making her OTT debut with Rohit Shetty’s Indian Police Force, also starring Sidharth Malhotra in the lead role.

Weekend Special: 5 Veg Mexican Snacks To Try Over The Weekend

Nothing To See Here, Just Kareena Kapoor Giggling With Her BFFs