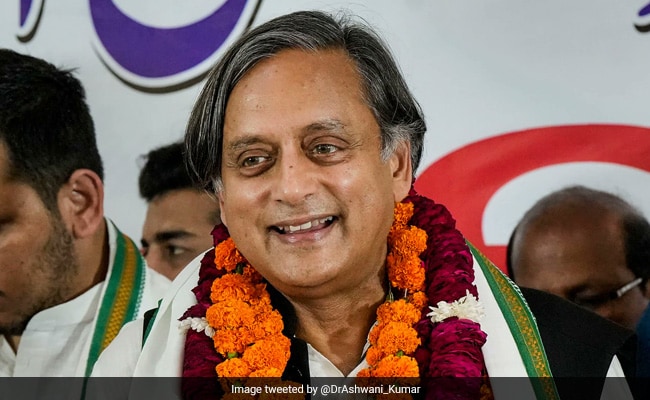 Shashi Tharoor said it was clear that party establishment would support M Kharge.

Congress leader Shashi Tharoor who lost to Mallikarjun Kharge in the recently concluded Congress presidential election, on Thursday, said that it was clear from the beginning that the party’s establishment would rally behind his opponent.

“I’m not upset, it was clear from the beginning that the party’s establishment would rally behind my opponent (M Kharge),” Mr Tharoor said while speaking at the launch of Congress veteran and former Union minister Mohsina Kidwai’s biography in the national capital.

He said that he spoke to Sonia Gandhi and she said “Look it’s not surprising that most of the party members will back one of their own”.

This comes a day after he beat his opponent Shashi Tharoor by a huge margin in the race to the party’s top post, thus becoming the first non-Gandhi to take over the office after 24 years.

Mr Kharge got 7,897 votes in the presidential contest while Mr Tharoor received 1,072 votes in the voting held on October 17.

The new Congress president will take charge of the post on October 26 at the All India Congress Committee (AICC) headquarters.

The invitation has been sent to all the above stakeholders by the General Secretary organisation KC Venugopal.

Congress is expected to resolve the Rajasthan Congress crisis soon after Mr Kharge assumes his position, added the sources.

Soon after his poll victory yesterday, Mr Kharge said that the party has presented an “example of strengthening the country’s democracy by conducting organisational elections” at a time when “democracy is in danger” in the country.

Addressing the media after his victory, Mr Kharge said Congress has “continuously strengthened democracy” in the 75-year history of the country and protected the Constitution.

“Now when democracy is in danger and Constitution is being attacked, and every institution is being broken, Congress has presented an example of strengthening the country’s democracy by conducting organisational elections at the national level. I thank everyone connected with the election,” he said.

He also congratulated Mr Tharoor and said that they discussed methods to take the party forward. Tharoor had visited Kharge’s residence to congratulate him on his victory.

“I want to congratulate my partner Shashi Tharoor as well. We were contesting the election as representatives. He met me and we discussed how to take the party forward,” Mr Kharge said.

Earlier yesterday, Sonia Gandhi and Priyanka Gandhi Vadra reached Mallikarjun Kharge’s residence and congratulated him on being elected as the new party president.

Rahul Gandhi also extended wishes to Mr Kharge and said that the post he has been elected to “represents a democratic vision of India”.

Court Refuses To Cancel Tejashwi Yadav’s Bail, But He Gets A Warning