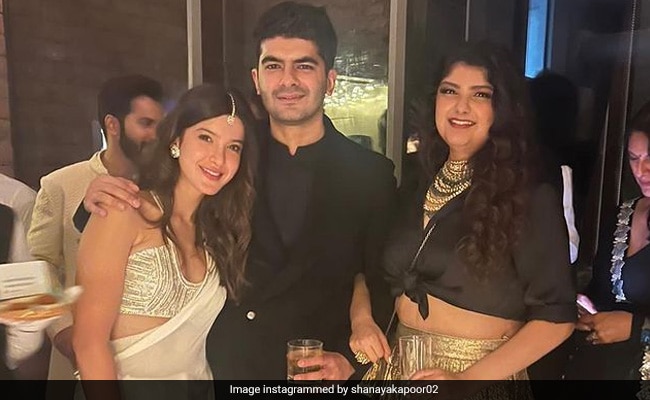 Attention, everyone. Shanaya Kapoor wants us to take her “besties”. FYI: We are not talking about Ananya Panday and Suhana Kapoor. Wondering, who it could be? Oh c’mon. It’s Shanaya’s cousins Anshula Kapoor and Akshay Marwah. The frames feature the trio, dressed in their fashionable best, smiling at the camera. The pictures are from the pre-wedding party hosted by designers Kunal Rawal and Arpita Mehta. Shanaya, for the caption, just wrote, “Besties” and added a white heart. Her mother, Maheep Kapoor has left a bunch of red hearts under the post. Akshay Marwah replied with a “love you” note.

Kunal Rawal and Arpita Mehta are all set to tie the nuptial knot on August 28, Sunday. The party was attended by the who’s who of Bollywood. From Arjun Kapoor-Malaika Arora to Varun Dhawan-Natasha Dalal, it was a star-studded affair.

Here are the pictures we are talking about:

Shanaya Kapoor is all set to make her Bollywood debut with Bedhadak. The film, directed by Shashank Khaitan, also stars  Lakshya and Gurfateh. Along with the announcement post, Shanaya wrote, “I am extremely grateful and humbled to join the Dharma Family with Bedhadak – directed by the brilliant Shashank Khaitan. I can’t wait to kickstart this journey, I need all your blessings and love.”

Shanaya Kapoor also shared a poster of the film and said, “A new era of love is filled with passion, intensity and boundaries that will be crossed. Presenting Bedhadak where I get to share the screen with my suave co-actors, Lakshya and Gurfateh – directed by the one and only Shashank Khaitan.”

Shanaya Kapoor was also seen in the hit Netflix show The Fabulous Lives of Bollywood Wives, which features her mother Maheep Kapoor and her friends – Seema Sajdeh, Bhavana Pandey and actress Neelam Kothari Soni. The show is all set to return with its second season on September 2.

The Internet Can’t Get Enough Of Deepika Padukone’s Cameo

Sham Kaushal Worked With Amitabh Bachchan For “More Than Four Decades.” See What He Posted On The Actor’s Birthday

“Love You Both So Much”