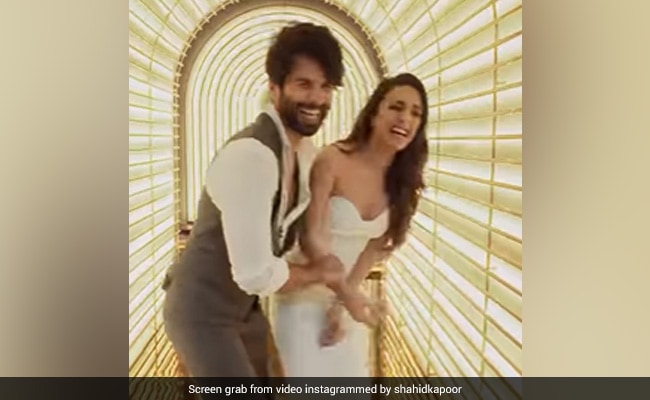 Shahid and Kiara in a still from the video. (courtesy kiaraaliaadvani)

While the new episode of Koffee With Karan 7 will air on Thursday, Kiara Advani and Shahid Kapoor managed to quench the curiosity of their fans by sharing a video from the sets of the show. In the video, the actors can be seen recreating a scene from their 2019 hit Kabir Singh. In the video, Kiara can be seen fixing her hair as she looks into a mirror held by a few crew members. Enter Shahid Kapoor (aka Kabir) and he yells, “Kisne touch kiya (who touched her).” He later says “Preeti” in an animated manner and both Kiara and Shaahid can’t help but laugh out loud. “Roasting it hot… with Kabir and Preeti .Koffee With Karan S7, Episode 8 streaming this Thursday at 12:00 am only on Disney+ Hotstar,” read the caption.

Meanwhile, Shahid Kapoor shared this picture with Kiara from the sets of Koffee With Karan 7 and he captioned it: “Koffee With Kiara… it’s a thing now…sorry Karan Johar.” In the comments section, KJo wrote: “I love it. I hope she doesn’t take my job.”

Sharing this picture, Kiara wrote: “Kabir…Kiara…Karan and lots of Koffeee.” Excited much?

Karan Johar shared a teaser from the episode that airs tomorrow and it has a glimpse of what to expect. Posting the promo, the filmmaker wrote: “This jodi has everyone’s hearts ‘preeti’ melted with their on-screen presence, but on the koffee couch they were as candid as they get! Hotstar Specials Koffee With Karan S7, Episode 8 streaming this Thursday 12:00 am only on Disney+ Hotstar.”

Mrunal Thakur Is In "DND Mode" As She Visits Chicago. See Pics

“For Me, It’s Just Vikram Vedha”

He Would Have Been 54 Today. 5 Songs To Remember Him By