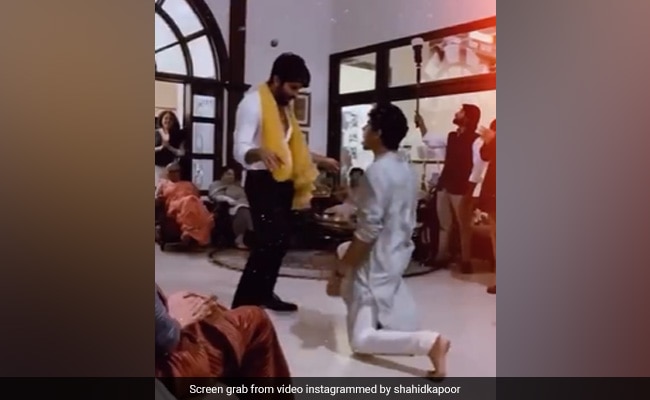 Shahid and Ishaan in a still from video. (courtesy: shahidkapoor)

The fact that Shahid Kapoor and brother Ishaan Khatter are impeccable dancers is well-known. Both the brothers have been trained by Shiamak Davar. Shahid, in fact, began his career as a background dancer in Bollywood films. Shahid’s latest Instagram entry is a subtle reminder of his amazing dancing skills. The video features the brothers dancing to a mix of Roop Tera Mastana like nobody’s watching. “We got it from our mama Neliima Azeem,” Shahid Kapoor captioned the post. In the comments section, Dino Morea commented: “This is sweet. You boizzz can definitely shake a leg.”

Shahid Kapoor is son of actors Pankaj Kapur and Neliima Azeem. Ishaan Khatter, son of Rajesh Khattar and Neelima Azeem, made his acting debut with Beyond The Clouds. Shahid Kapoor is best-known for his performances in films such as Udta Punjab, Haider, Jab We Met, “Padmaavat” and Ishq Vishk and the 2019 hit Kabir Singh, co-starring Kiara Advani, to name a few.

Ishaan Khatter’s upcoming project is Phone Bhoot, a horror comedy, in which he will co-star with Katrina Kaif and Siddhant Chaturvedi. He will also star in Pippa, a project he announced on Independence Day.

RRR Stars Ram Charan And Jr NTR On Their Family Rivalry: “We Were Bored”

Rashmika Mandanna And Vijay Deverakonda, Rumoured To Be Dating, Fly Back From Maldives