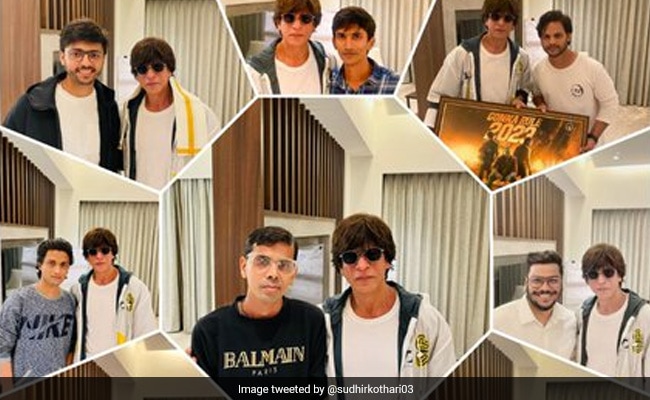 Shah Rukh Khan, who was shooting for Atlee’s Jawan in Chennai, hosted a special fans meeting after wrapping the schedule of the movie. According to a report in News 18, a fan named Sudhir Kothari requested Shah Rukh Khan’s team to arrange a meeting. “I reached out to Pooja Dadlani ma’am and Karuna (Badwal) ma’am who manage sir. They spoke to sir, who said that he would like to meet us once he finishes the shoot. After a few days I got a call that sir will meet us on October 8 which was the day when he wrapped up the Chennai schedule of Jawan,” News 18 quoted Sudhir Kothari saying.

As per a report in News 18, Shah Rukh Khan met 20 fans at his hotel, which was on the outskirts of Chennai. The actor met each fan individually in his suit and clicked pictures with them. “Sir told his staff that he would like to meet us individually in his suite. He gave us all enough time to interact, click pictures and even present him with our gifts. He didn’t rush and was very gentle and soft spoken and heard everyone and interacted really sweetly. While leaving he told us to have dinner and go,” News 18 quoted Sudhir.

Sudhir Kothari, a fan, shared the pictures from the meeting on his Twitter account. Check out the pictures below:

Thank you @iamsrk sir for showering your blessings and spending time with our #Chennai team members. It’s best ever moments.🙏🏻😍
Love You Sir ♥️#Jawan#ShahRukhKhan𓀠#SRKCFC@sudhirkothari03pic.twitter.com/38cCFUOWy6

My #Chennai Family With King ♥️#ShahRukhKhan𓀠#SRKCFCpic.twitter.com/Zc1TIsAhIe