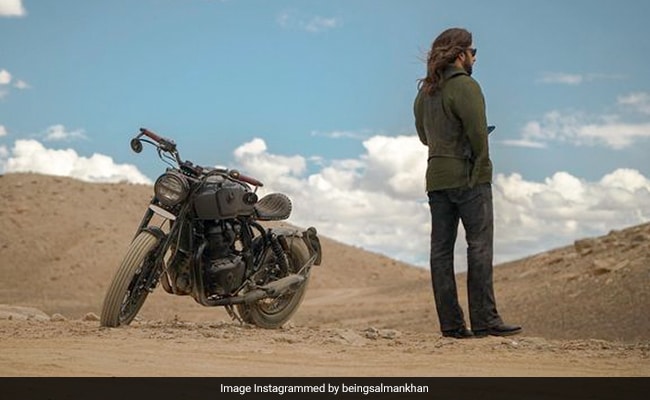 Salman Khan teased his Instafam with a behind-the-scene picture from the sets of his forthcoming film Kabhi Eid Kabhi Diwali on Friday. For the shoot, the actor checked into Leh, Ladakh. Salman Khan can be seen sporting long hair in the picture. He simply captioned the post: “Leh… Ladakh.” The film will also feature former Bigg Boss star Shehnaaz Gill. Earlier this month, there were rumours that the actress has been ousted from Salman Khan’s Kabhi Eid Kabhi Diwali. In an Instagram story, she clarified and wrote: “Lol, these rumours are my daily dose of entertainment since last few weeks. I can’t wait for people to watch the film and of course me too in the film.”

Earlier this month, the actor shared a picture from his prep session for the film. It was a photo from Salman Khan’s workout. “Being strong,” he captioned it.

Earlier in May this year, Salman Khan shared a BTS picture from the film and he captioned it: “Shooting commences for my new film.”

ICYMI, this is the post we are referring to:

On the work front, Salman Khan was last seen in the film Antim, directed by Mahesh Manjrekar, which also featured Salman Khan’s brother-in-law Aayush Sharma (married to Arpita Khan). He also announced the second installment of Bajrangi Bahaijaan. The actor’s forthcoming projects include Kick 2, with Jacqueline Fernandez and Tiger 3 with Katrina Kaif. The actor was also seen hosting the TV reality show Bigg Boss 15, which was won by TV star Tejasswi Prakash.

“It Has Just Gone A Bit Overboard Now”