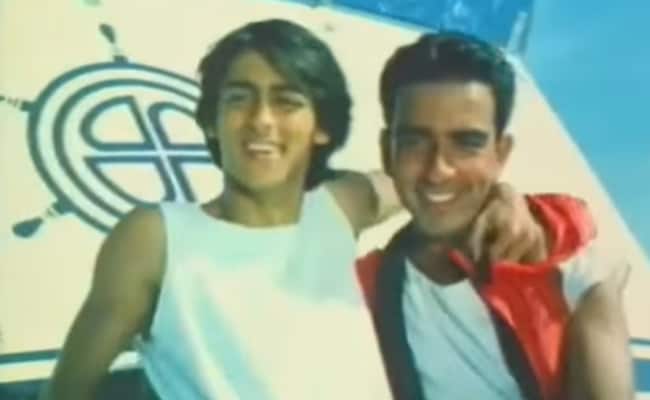 A still from the video. (courtesy: ayeshashroff)

Salman Khan made his acting debut in Bollywood in 1988 with the movie Biwi Ho To Aisi, starring Rekha, Farooq Sheikh and Bindu. In the movie, he played the role of Farooq Shaikh’s brother. Next, he featured as a lead actor in the 1989 movie Maine Pyaar Kia alongside Bhagyashree, which was well received by the audience and critics. It was a blockbuster hit at the box office and won six Filmfare Awards.

During Tara Sharma’s chat show in 2019, Salman Khan opened up about how he bagged his first ad, before stepping into Bollywood. He said, “I was swimming one day at the Sea Rock Club and I saw this really beautiful, young lady walking past in a red sari. To impress her, I dived in the water and being such an idiot, I swam the whole length underwater. So when I came out on the other side, she was not there. The next day, I got a call from Far Productions, saying that they want me to do a cold drink commercial – it was Campa Cola, at that point of time and I was wondering, ‘How did this come about?’ I went there to meet Kailash with my aunt.”

Salman Khan added, “We were supposed to shoot that in the Maldives and they did want somebody who knew how to swim underwater. Me and Jackie’s (Shroff) wife Ayesha were the only two who could do those laps underwater. That’s how I faced the camera for the first time.”

On the work front, Salman Khan will be next be seen in GodFather and Tiger 3.

4 Things To Look Out For While Buying Packaged Food

10 Food Combinations That Are Best Avoided In Daily Diet