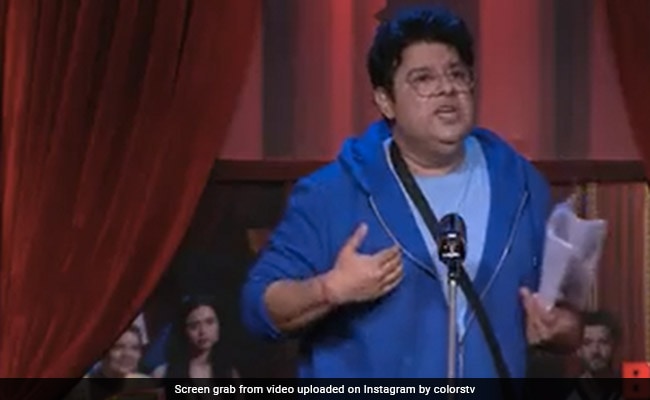 Sajid Khan in a still from the show. (courtesy: colorstv)

The second day in the Bigg Boss 16 house started on a chirpy note, with the housemates waking up to a peppy song (in the signature Bigg Boss style). But soon, the mood turned glum because of the first nominations round. It also sparked an argument between Sajid Khan and Shalin Bhanot. The television actor had nominated Sajid Khan for the elimination round. When the filmmaker learned about this, he took a sly dig at Shalin Bhanot. Sajid Khan revealed that Shalin Bhanot had called him, before the show, and said that he is like Farah Khan’s brother. But contrary to what he said outside the show, Shalin Bhanot was among the first ones to nominate him, said Sajid Khan.

“Tune mujhe phone kar ke kaha tha (you had called me and said) that ‘Farah [Khan] is my sister, we are one family.’ So, you do that (nominate) to a family?” asked Sajid Khan to Shalin Bhanot when the duo were sitting in the garden area with others. The Naagin actor kept on justifying that he nominated Sajid Khan because that’s how this game is played an d to him, every other person in the house is a “contender.” To this, Sajid Khan said, “But then why did you say that Farah is like your sister?” Shalin Bhanot then replied, “Because I know sir you won’t be leaving this show based on my nomination.”

Shalin Bhanot added that if they are in a game, he would love to support the one who needs the prize money over Sajid Khan, who already has “all” (fame and money). The director called his opinion the “nicest and the most stupid thing” he has heard till now. But the debate didn’t end there.

In a promo clip of Bigg Boss 16, Sajid Khan and Shalin Bhanot are seen at loggerheads over the nominations round. During his stand-up comedy, the Humshakals director took a jibe at Shalin Bhanot  and said, “Bigg Boss ke baad iss ghar ki dusri awaaz Shalin hai, yahan aane ke pehle tum mujhe keh raha the ke Farah Khan ka tu dusra bhai hai, toh nominate mjhe kyu kiya (after Bigg Boss, it is Shalin who is the voice of the house. Before this show, you told me that you are Farah’s second brother, then why did you nominate me)?” A furious Shalin Bhanot gave a thumbs down to Sajid Khan, who then questioned him why isn’t he behaving friendly? “Kal bhi tune mujhe nominate kiya tha and aaj bhi tune mujhe thumbs down diya, tu kaun sa bhai hai (Yesterday, too, you nominated me and now, you are giving me a thumbs down. What kind of brother are you).” Shalin Bhanot  replied, “Aap mujhe ungli kar rahe ho (you are poking me), do you even want to listen to me.” He argued: “Aap yaha pe ho kyun (why are you here)? Aaye kyun ho yaha pe (Why have you joined this show)?”

In tonight’s episode, viewers will see the duo engaging in an argument and deciding on their groups in the house. Stay tuned for more updates on Bigg Boss 16.

How To Make Fried Food Healthier - Easy Tips And Hacks

Shah Rukh Khan Smitten By Deepika Padukone. Who Can Blame Him?

“Much Honoured, Respect For Parents”

“You All Have Helped Me In…”