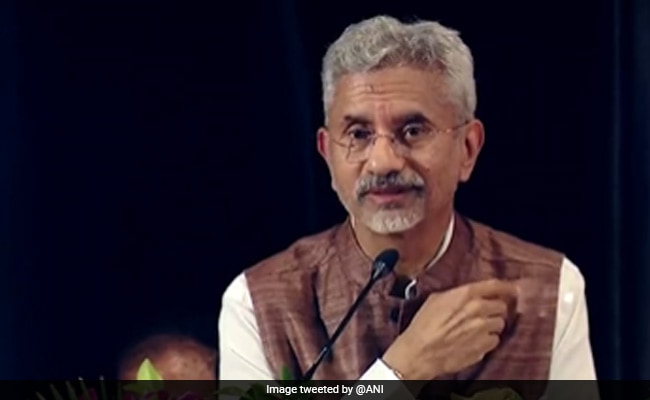 Peace and tranquillity in the border areas remain the basis for normal ties between India and China and “new normals of posture” will inevitably lead to “new normals of responses”, External Affairs Minister S Jaishankar said on Tuesday, amid the lingering standoff in eastern Ladakh.

Delving into Sino-India relations following the border row, he said the last few years have been a “period of serious challenge”, both for the relationship and for the prospects of Asia, noting that continuation of the current impasse will not benefit either India or China.

“Peace and tranquillity in the border areas clearly remains the basis for normal relations. From time to time, this has been mischievously conflated with the sorting out of the boundary question,” he said.

S Jaishankar was delivering an address on the topic, “China’s Foreign Policy and International Relations in the New Era”, at a conference organised by the Center for Contemporary China Studies (CCCS).

“The last few years have been a period of serious challenge, both for the relationship and for the prospects of the continent. The continuation of the current impasse will not benefit either India or China. New normals of posture will inevitably lead to new normals of responses,” he said.

“It is the willingness to take a long-term view of their ties that the two countries must display today,” Mr Jaishankar said.

In an oblique reference to China’s attempts to change the status quo along the border he said, “the truth is that the prerequisite has been and remains one much more modest; and even that was breached in 2020.” The ties between India and China came under severe strain following the deadly clash in Galwan Valley in Eastern Ladakh in June, 2020.

“India’s search for a more balanced and stable relationship with China take it across multiple domains and many options. Given the developments of 2020, they obviously focus on an effective defence of the border. This was notably undertaken even in the midst of Covid,” Mr Jaishankar said.

He said India must prepare to compete “more effectively, especially in our immediate periphery.” The external affairs minister asserted that the Sino-India ties must be based on three mutuals: mutual sensitivity, mutual respect and mutual interest.

“Establishing a modus vivendi between India and China after 2020 is not easy. Yet, it is a task that cannot be set aside. And this can only become sustainable on the basis of three mutuals: mutual respect, mutual sensitivity and mutual interest,” he said.

On the seven decades of engagement between the two sides, the external affairs minister said it would be fair to state that India has essentially taken a determinedly bilateral approach to China.

“Looking back at seven decades of engagement, it would be fair to state that India has essentially taken a determinedly bilateral approach to China. There are many reasons for this including a sense of Asian solidarity and a suspicion of third party interests that emanated from other experiences,” he said.

“Indeed, Indian policy in the past has exhibited a remarkable degree of self-restraint that led to the expectation that others can have a veto over its choices. That period, however, is now behind us. The ‘new era’ is apparently not just for China,” he noted.

While noting divergences between India and China, the external affairs minister noted that it is really their “structural gaps” that have developed over the last 60 years which present a challenge.

“These have two broad metrics: one, the Cumulative Border Balance (CBB) and the other, Comprehensive National Power (CNP),” he said, adding, “Any objective analysis of the relationship must necessarily, take both into account, recognising that there is a linkage between them.” Outlining India’s priorities, S Jaishankar said building deeper relationships and promoting better understanding of its interests internationally strengthens the country.

“We must prepare to compete more effectively, especially in our immediate periphery,” he said.

Following the eastern Ladakh standoff, India has been consistently maintaining that peace along the Line of Actual Control (LAC) was key for the overall development of the ties and that the state of the border will determine the state of the relationship.

The eastern Ladakh border standoff erupted on May 5, 2020, following a violent clash in the Pangong lake areas.

Both sides gradually enhanced their deployment by rushing in tens of thousands of soldiers and heavy weaponry.

As a result of a series of military and diplomatic talks, the two sides completed the disengagement process last year on the north and south banks of the Pangong lake and in the Gogra area.

The disengagement in the Pangong Lake area took place in February last year while the withdrawal of troops and equipment in Patrolling Point 17 (A) in Gogra took place in August last year.