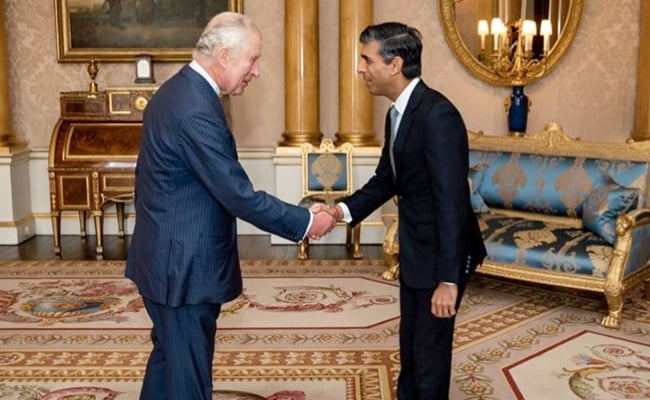 Rishi Sunak and Akshata Murty have consistently been under the scanner for their wealth. (File)

The irony of one of Britain’s richest men occupying the Prime Minister’s residence at 10th Downing Street as the country undergoes the worst economic crises in decades was aptly captured by UK’s beloved Larry the cat: “[Rishi Sunak’s] family is loaded so caviar and lobster on the menu for me from tomorrow.”

Rishi Sunak is becoming Prime Minister. His family is loaded so caviar and lobster on the menu for me from tomorrow.

Watching Rishi Sunak, who the Sunday Times crowned the 222nd richest person in the UK, become prime minister may have been a hard pill for Britons to swallow, especially since Rishi Sunak and his wife, Akshata Murty, have a combined fortune roughly double the estimated net worth of King Charles and Camilla, Queen Consort.

The recently anointed King of England is estimated to have a net worth of £300m-£350m, the Guardian reported, which he inherited from his mother, the late Queen Elizabeth who was considered to be among the richest people in the world. The Queen’s net worth was estimated at £370m on the 2022 Sunday Times Rich List, a £5m increase from the previous year.

Rishi Sunak and Akshata Murty have consistently been under the scanner for their wealth. Earlier this year, Rishi Sunak spent nearly Rs 3.8 crore on a luxurious swimming pool inside his £7 million mansion, just weeks ahead of the prime ministerial polls.

Sunak’s wife, Akshata Murty, is an Indian citizen, with a stake of 0.93 per cent in Infosys valued at about $721 million, and the couple’s wealth has been a divisive issue for the British public.

Asked in August how he could relate to the public given he was personally richer than the monarch Queen Elizabeth, Rishi Sunak said that people shouldn’t hold his wealth against him.

“I think in our country, we judge people not by their bank account, we judge them by their character and their actions. And yes, I’m really fortunate to be in the situation I’m in now, but I wasn’t born like this,” Sunak told a leadership hustings event in Darlington, northern England.

The Indian-origin leader is the youngest to hold the UK’s top post in 200 years and the first Hindu Prime Minister of Britain. Mr Sunak is Britain’s third Prime Minister this year, after Liz Truss left office just 49 days into her term.

(With inputs from Reuters)

Devendra Fadnavis Says Maharashtra Cabinet To Be Expanded Soon, But...

“Support He Provided In My Early Days Crucial For My Growth”: Virat Kohli On MS Dhoni