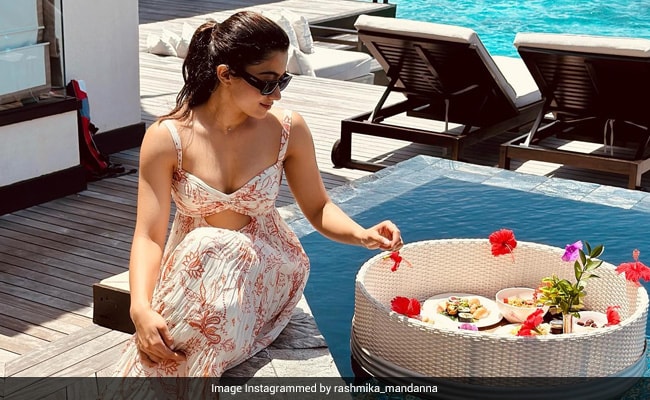 Maldives alert. This time, it is Rashmika Mandanna. The actress, who made her Bollywood debut with Goodbye, has finally taken a break from her work schedule. Rashmika is having the time of her life and we know it from her latest updates on social media. She has shared a picture from her breakfast time on Instagram. Here, the actress is seen enjoying the statement floating breakfast. Don’t miss the breathtaking view. Along with the picture, Rashmika has shared a beach, sunflower and red heart emojis.

Rashmika Mandanna has also shared a series of Stories on Instagram. The first picture is a mirror selfie where the diva is looking gorgeous in a beautiful multi-coloured maxi dress. Greeting her followers, she mentioned, “Hi loves,” and added a white heart emoji. 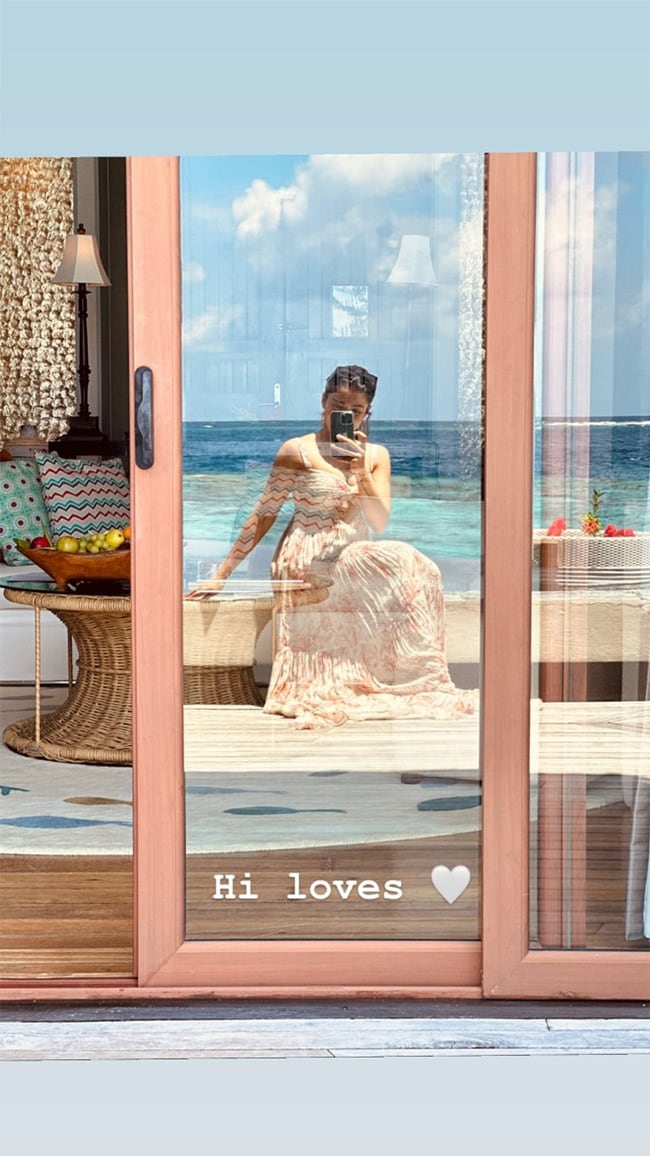 Rashmika Mandanna did not stop there. Next, we get a glimpse of a beautiful beach with lush green coconut trees. 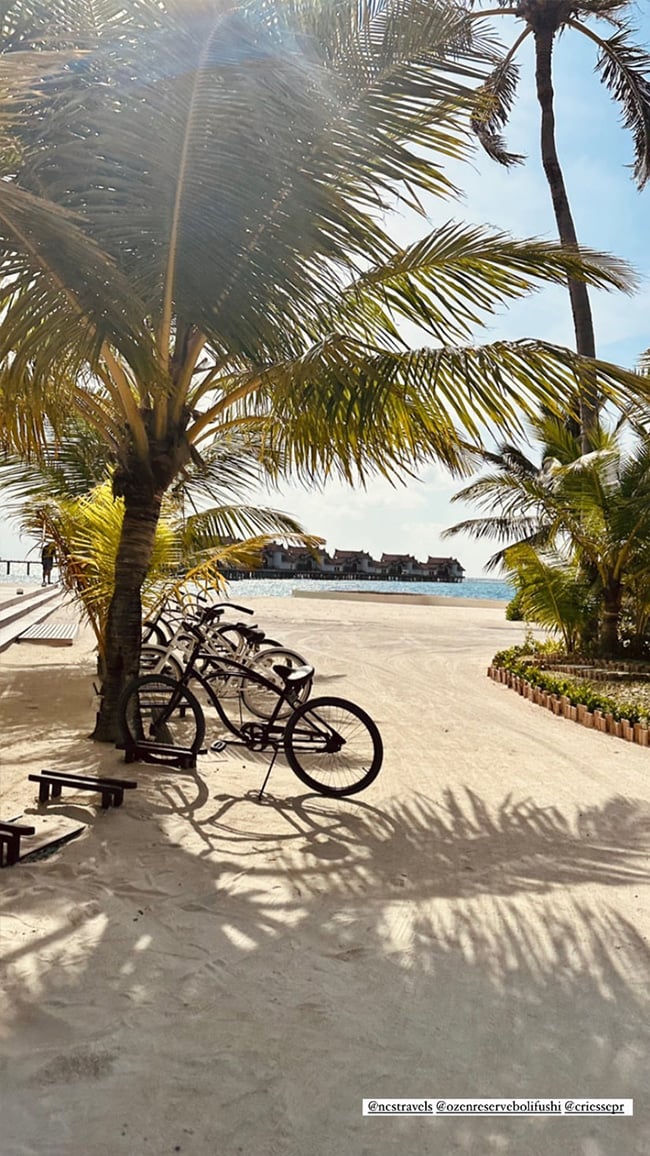 Rashmika Mandanna also shared a picture giving us a sneak peek into her food diaries. From delicious cookies to berries, the platter looks yummilicious. 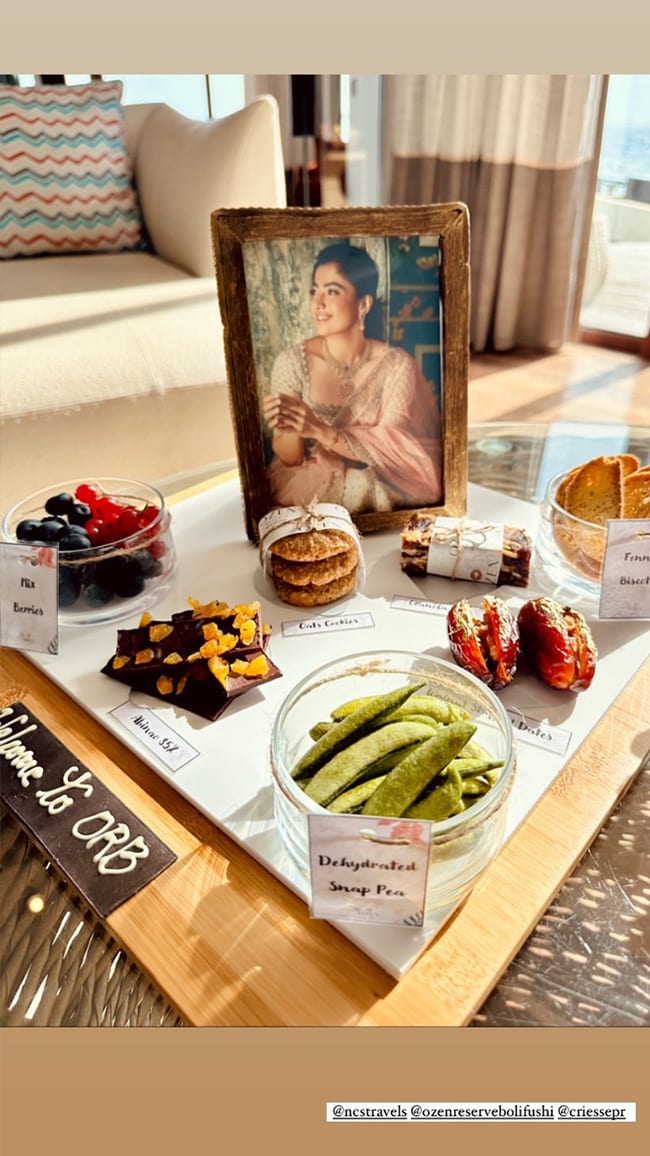 Rashmika Mandanna’s latest release Goodbye also stars Amitabh Bachchan and Neena Gupta. The film, by Vikas Bahl, is an intense family drama. Pavail Gulati, Sunil Grover and Elli AvrRam are also part of the film, which is jointly bankrolled by Balaji Motion Pictures and Good Co. Rashimka’s last film was Pushpa: The Rise opposite Allu Arjun. The Sukumar directorial went on to become a massive hit. Be it the dialogue or songs, the movie checked all the boxes. When asked about the pressure she was feeling after Pushpa’s massive success, Rashmika told Pinkvilla, “For me, No. Pushpa was one film which we have done and it has got such good response too. An equally important film of mine is Goodbye. Even this film, I want people to come and watch, love, and relate to. So, for me, every film is equally important and very different. Every film that I do is extremely special to me and I do only those films which are going to be special to me because at least that is in my control.”

Rashmika Mandanna will be next seen alongside Sidharth Malhotra in Shantanu Bagchi’s Mission Majnu. She also has Animal opposite Ranbir Kapoor in her kitty. Meanwhile, Amitabh Bachchan and Neen Gupta will be next in Sooraj Barjatya’s Uunchai. Anupam Kher, Boman Irani, Sarika, Parineeti Chopra, and Danny Denzongpa are also part of the film.

Connect Review: Nayanthara Shines Bright In A Dystopian Drama That Thrives In The Dark

“Don’t Feel The Need To Justify”