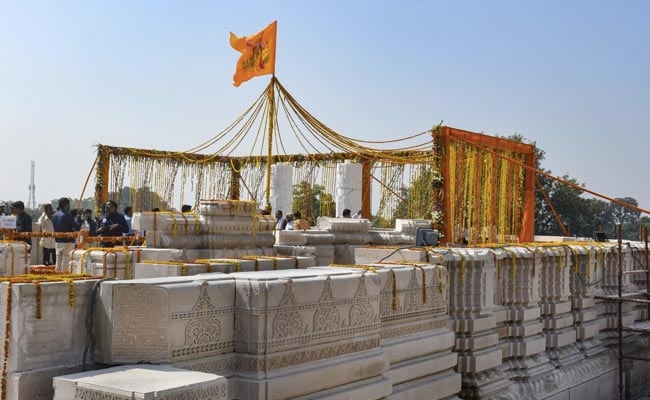 An estimated Rs 1,800 crore will be spent on building the Ram temple, the trust member said.

The grand Ram temple in Ayodhya will be open to devotees in January 2024 after the installation of idols of the deity, said a key member of the trust set up to oversee its construction.

The Shri Ram Janmabhoomi Teerth Khestra on Tuesday said 50 per cent of the construction work of the temple has been completed and the overall progress is satisfactory.

“The temple will be open to devotees in January 2024 after the installation of idols of Ram Lalla in the sanctum sanctorum of the shrine on the festival of Makar Sankranti,” trust general secretary Champat Rai told PTI.

He said the ground floor of the temple will be ready by December next year and around January 14, 2024, idols of Lord Ram will be installed.

“An estimated Rs 1,800 crore will be spent on building the Ram temple,” Mr Rai said, adding that space will be made for idols of prominent Hindu seers.

A group of journalists were on Tuesday taken to the elevated place from where Prime Minister Narendra Modi had inspected the construction work of the temple.

The prime minister performed the “Bhoomi puja” for the construction of the temple on August 5, 2020.

A Supreme Court verdict of November 9, 2019, paved the way for the construction of the Ram temple in Ayodhya.

According to the plan, temples of Valmiki, Kewat, Shabari, Jatayu, Sita, Vighneshwar (Ganesh), and Sheshavatar (Lakshman) will also be constructed within a 70-acre area in the vicinity of the Ram temple.

A rectangular, two-storeyed ‘Parikrama’ road is also being constructed, enclosing a total of eight acres of land including the area of the temple and its courtyard. In its eastern part, there will be an entrance made of sandstone.

White marble from the Makrana hills in Rajasthan will be used inside the sanctum sanctorum of the temple.

Modi’s visit to Ayodhya on October 23 was the first after he laid the foundation stone two years back.

After offering prayers to Ram Lalla at the makeshift temple, the Prime Minister reviewed the progress of the construction work.

The opening of the temple for devotees at the beginning of 2024 is seen as politically important too as the Lok Sabha elections are scheduled for later that year.

The BJP has been highlighting the Ayodhya issue for a long and the opening of the temple for the devotees is expected to generate enthusiasm among Hindus.

ET Money Show: Ways to transfer a Demat account after a loved one passes away - The Economic Times Video

You Will Realise In Jail, Says Supreme Court To Man For Calling Judge Terrorist

2 Killed As 12-Wheel Truck Overturns On Eatery In Bengal