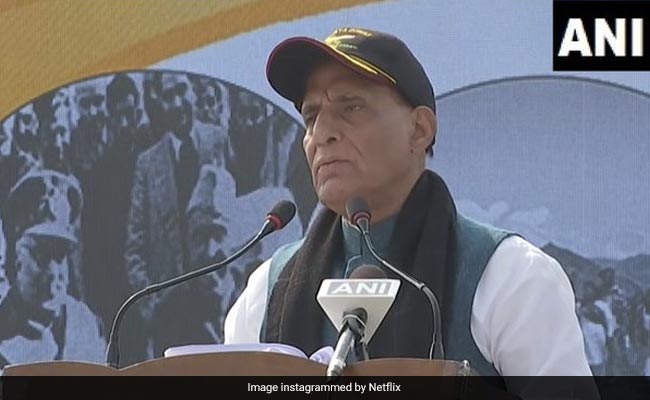 “Terrorism has no religion. The only aim of terrorists is to target India,” Rajnath Singh said.

Defence Minister Rajnath Singh today said Pakistan is committing atrocities against people in its occupied Kashmir and will have to bear its consequences.

Hinting at retrieving Pakistan-occupied Kashmir (PoK), the minister said the goal of overall development in the twin Union Territories of Jammu and Kashmir and Ladakh will be achieved “after reaching Gilgit and Baltistan” — parts of PoK.

“We have just begun our journey of development in Jammu and Kashmir and Ladakh. We will achieve our goal when we reach Gilgit and Baltistan,” Singh said addressing the ‘Shaurya Diwas’ event — enactment of landing at Srinagar by Indian Air Force on this day in 1947.

Referring to the “atrocities” committed by Pakistan against the people in PoK, the defence minister said the neighbouring country will have to “bear its consequences”.

“Terrorism has no religion. The only aim of terrorists is to target India,” he said.

Singh said the Centre’s decision to abrogate Article 370 on August 5, 2019, ended the discrimination against the people in Jammu and Kashmir.

“The discrimination against the people of Jammu and Kashmir was ended under the leadership of Prime Minister Narendra Modi on August 5, 2019,” he said.

What Rishi Sunak Told NDTV About His Billionaire Father-In-Law (Aired: May, 2015)

World’s Highest Polling Station Is In Himachal With 52 Voters

Smriti Irani’s Perfect Chill Moment As She Travels Through UP