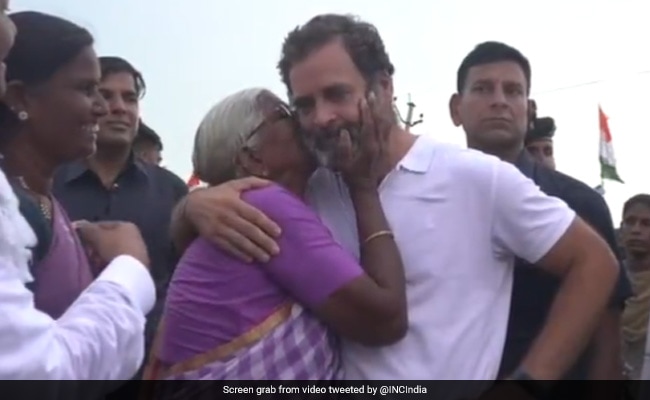 The video of the elderly woman meeting Rahul Gandhi was shard by Congress on Twitter.

A video of an elderly woman embracing and blessing Congress leader Rahul Gandhi during the Bharat Jodo Yatra has been widely shared on social media. Mr Gandhi, along with his party workers, continues to march with the aim to reach Kashmir from Kanyakumari traversing many states and Union Territories.

In the video clip, uploaded by Congress on Twitter, Mr Gandhi can be seen surrounded by a crowd and interacting with an old woman. The woman can be seen blessing the Congress leader as she pats on his shoulder. Towards the end, they share a hug before Mr Gandhi again sets off for the march waving at his followers.”Mamta ki chaon,” the caption read.

The Congress foot march, which kicked off on September 7, recently completed 1,000 kms. Throughout the journey, Rahul Gandhi and his fellow yatris have been interacting with people and sharing special moments with them.

Rahul Gandhi was also joined by his mother Sonia Gandhi, the interim president of the Congress Party, in Mandya, Karnataka. This was Sonia Gandhi’s first public outing after she contracted COVID-19 earlier this year. A photo was also shared by the party on Twitter that showed Mr Gandhi tying his mother’s shoelaces during the walk.

Earlier, another video had gone viral from the foot march, where a girl couldn’t control her tears after meeting Mr Gandhi. It shows the girl jumping with joy, laughing, and crying at the same time as she was allowed to meet the Congress leader.

No caption needed.
Only love ♥️#BharatJodoYatrapic.twitter.com/LSnbCEBk5v

Under the Bharat Jodo Yatra, Rahul Gandhi will be covering 12 states and two Union Territories in roughly five months.

Diwali 2022: Here Are 7 Evergreen Diwali Recipes To Impress Your Guests