There is a reason why we call Priyanka Chopra a “desi girl.” No, it is not just for her film Dostana or her song Desi Girl. From her love and respect for Indian culture to taking the desi flavours to the streets of New York, the actress has done it and how. Priyanka also shares snippets from her time at her restaurant SONA, which offers lip-smackingly delicious food. And, today is one of those days. The actress decided to go on a binge-eating spree to satiate her cravings. The actress shared a “behind the scenes from SONA, New York” video on Instagram. Here, the first thing we see is Priyanka holding a skewer (stick) decorated with kebabs presumably grilled. She exclaimed that it is “steaming hot.” Next, a delicious platter decorated with sliced fruits and other ingredients topped with some greens.

Further in the video, Priyanka Chopra can be seen interacting with the chefs – Harish and Hari – asking them to make her competent in the kitchen. She said, “I am not saying that I can make any of these things but what is happening here?” The actress then introduces the other dish – Burrata butter chicken pizza. She bites into a slice of the pizza and her reaction says it all. The chef also walked her through the preparation of Avocado bhel. Priyanka added, “I love bhel”. When asked about the seasoning, the chef revealed, “Chaat masala.” And, guess what? Priyanka is a big fan of this particular seasoning. “I love chaat masala. For those of you who know, you know,” she said.

The video also featured delectable Amritsari crispy fried fish. Priyanka said, “Fried fish, my favourite”. She then added, “My mind is exploding a little bit. That’s what I love about SONA and what all we do here.”

For the caption, Priyanka mentioned, “Behind the scenes from SONA New York’s kitchen. Clearly, I love a lot of things.” She also tagged the chefs for all the insanely yummy food.

Priyanka Chopra’s cheat meal day didn’t end there. Check it out in her Instagram Stories. She enjoyed a wholesome pizza. 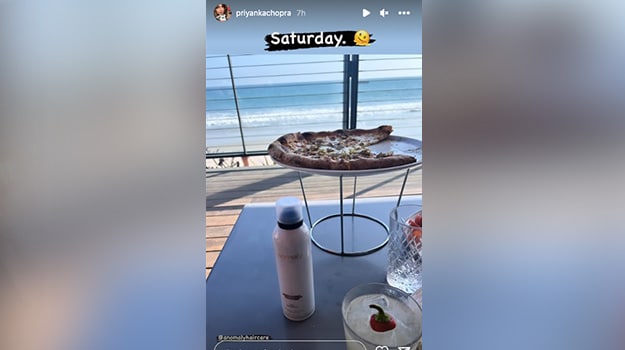 What do you think about Priyanka Chopra’s gastronomic adventure of late?

Dont Have Bread? Chef Pankaj Bhadouria Shows How To Make Sandwich Without Bread

How To Make Moong Dal Parcels – A Crispy, Protein-Rich Snack To Pair With Evening Tea