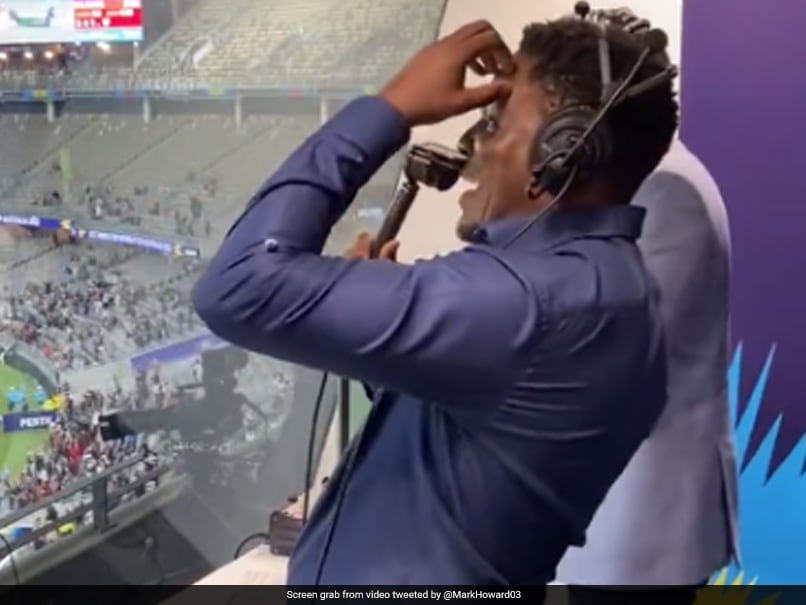 Pommie Mbangwa gets off his chair while commentating during Zimbabwe’s match vs Pakistan.

Zimbabwe stunned Pakistan by the barest of margins in the ongoing T20 World Cup on Thursday. Defending a below-par total of 130 for 8 against a power-packed batting line-up of Pakistan at the Perth Stadium, minnows Zimbabwe managed to edge past the 2009 champions with a one-run margin. Their bowlers put a discipline show and their fielders gave it their all on the ground to fight tooth and nail against Pakistan, who were the clear favourites to win the game.

Pakistan needed 3 runs off the final 3 balls to win the match, but Brad Evans conceded only one run off the remaining deliveries to help his side win the last-ball thriller.

From the Zimbabwe players to the team’s fans, all went berserk over such a thrilling win. Meanwhile, cricket-turned-commentator Pommie Mbangwa, a former right-arm pacer who used to play for Zimbabwe, was on his feet and found it hard to control his emotions.

He got off his chair while commentating during the match and his ecstasy had no limits as soon as his side won the contest.

With Pakistan needing three runs off the final three balls, Brad Evans bowled a dot ball to Mohammad Nawaz before claiming his wicket on the very next ball.

Needing 3 runs off the final ball, Pakistan’s Shaheen Afridi hit the ball towards long-on and looked to run a couple but Sikandar Raza‘s smart and composed throw at the wicketkeeper’s end got the better of Shaheen.

Raza was also the pick of the bowlers for Zimbabwe with figures of 3 for 25.

According To Raveena Tandon, "Birthdays Are Always Binge Days" (Pic Inside)

"Gun-Toting Or Pen-Wielding, Have To Defeat All Forms Of Naxalism"

“We Take Responsibility For Stubble Burning”: Arvind Kejriwal On Pollution