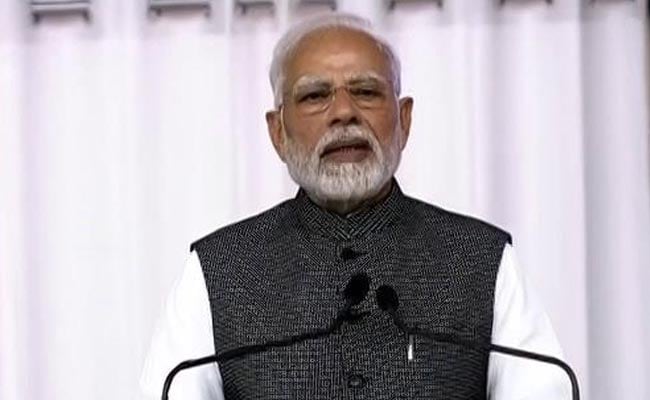 Prime Minister Narendra Modi while laying the foundation stone for an aircraft manufacturing facility in Gujarat’s Vadodara said it was India’s giant leap towards becoming self-reliant in aviation sector.

This is the first time that such a huge investment is taking place in India’s defence aerospace sector, the PM said, adding that his government has carried out several economic reforms over the years. These reforms have hugely benefitted the manufacturing sector and given it a boost, he added.

“The world’s fastest growing aviation sector is in India today. We are about to be in the top three countries globally in terms of air traffic,” he said.

Despite disruptions in the supply chain, in spite of the circumstances created by Covid and a war, India continues to be the growth momentum in the manufacturing sector, the Prime Minister said.

The PM was felicitated by Gujarat Chief Minister Bhupendra Patel and Tata Sons chairperson N Chandrasekaran at the site of the C-295 transport aircraft manufacturing facility.

Transport aircraft to be built in Vadodara will not only give strength to our army, it will also develop a new ecosystem for aircraft manufacturing, PM Modi said.

“India, following the mantra of ‘Make in India, Make for the Globe’ is today increasing its potential,” he added.

The C-295 transport aircraft for the Indian Air Force will be manufactured by Tata-Airbus, the Defence Ministry has said. Apart from making 40 aircraft, this facility at Vadodara will manufacture additional aircraft for Air Force requirements and exports.

Tata-Airbus combine had said that C-295 manufacturing is “the first Make in India aerospace programme in the private sector involving the full development of a complete industrial ecosystem; from manufacture to assembly, test and qualification, to delivery and maintenance of the complete lifecycle of the aircraft.”

The Defence Ministry said manufacturing of over 13,400 detail parts, 4,600 sub-assemblies and all the seven major component assemblies of the aircraft will be undertaken in India.

It said various systems such as engines, landing gear and avionics will be provided by Airbus Defence and Space and integrated into the aircraft by the TATA Consortium.

With a proven capability of operating from short or unprepared airstrips, the C295 is used for tactical transport of up to 71 troops or 50 paratroopers, and for logistic operations to locations that are not accessible to current heavier aircraft.

The aircraft can airdrop paratroops and loads, and also be used for casualty or medical evacuation. It is capable of performing special missions as well as disaster response and maritime patrol duties.

The project is expected to generate 600 highly skilled jobs directly, over 3,000 indirect jobs and an additional 3,000 medium-skill employment opportunities with more than 42.5 lakh man-hours of work within the aerospace and defence sector.

Nearly 240 engineers will be trained at the Airbus facility in Spain for the project.