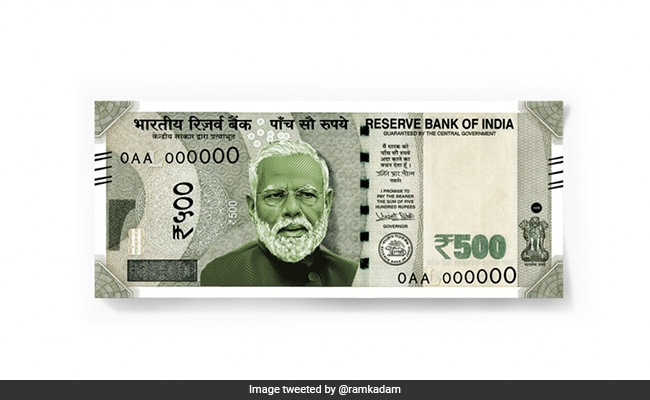 At present, only Mahatma Gandhi’s image is used on Indian rupee notes.

“How can we ignore Prime Minister Narendra Modi’s great sacrifice, dedication and hard work as he makes the country proud across the globe?” he said in a follow-up tweet, “Not only India but the whole world will remember Modi ji efforts to make India great, till the end of time.”

The legislator from Ghatkopar accused AAP boss and Delhi Chief Minister Arvind Kejriwal — who demanded images of Lord Ganesh and Goddess Lakshmi to “ensure the rupee’s recovery” — of doing “politics of deceit”.

He tweeted, not naming Mr Kejriwal. “But if he had said this honestly, from the heart, the country would have accepted hit. His past tells us that these people remember our deities only during elections.”

Mr Kejriwal’s demand is being seen as the AAP’s latest bid to attract the BJP’s core Hindutva base.

The BJP has said he is “doing political drama” to divert people’s attention from the “flaws of his government and the anti-Hindu mindset of his party”.

Just hours after the AAP leader made the demand, another Maharashtra BJP MLA Nitesh Rane had shared a photoshopped 200-rupee note with an image of the emperor Shivaji. The caption said, “Yeh perfect hai.”

BR Ambedkar’s photo was suggested also by Manish Tewari, the Congress MP from Punjab’s Anandpur Sahib, who tweeted, “On one side the great Mahatma (Gandhi) the other side Dr (BR) Ambedkar… Non-violence, Constitutionalism and egalitarianism fusing in a unique union that would sum up the modern Indian genius perfectly.”