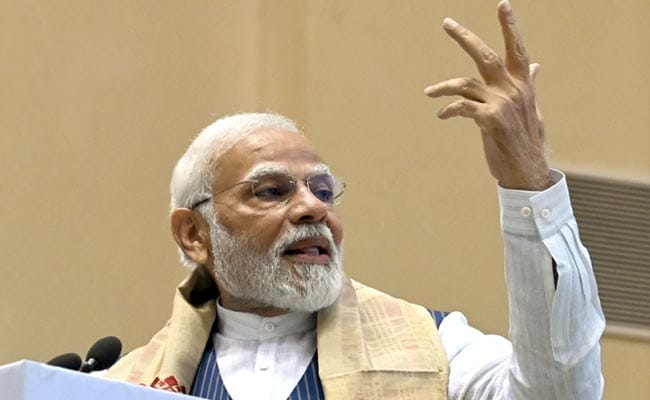 Prime Minister will inaugurate Phase – I of Samruddhi Mahamarg, covering a distance of 520 Km and connecting Nagpur and Shirdi.

According to an official press release, Samruddhi Mahamarg or Nagpur-Mumbai Super Communication Expressway project is a major step towards realising the Prime Minister’s vision of improved connectivity and infrastructure across the country.

The 701 Km expressway – being built at a cost of about Rs 55,000 crore – is one of India’s longest expressways, passing through Maharashtra’s 10 districts and prominent urban regions of Amravati, Aurangabad, and Nashik.

The expressway will also help improve the connectivity of adjoining 14 other districts, thus helping in the development of about 24 districts of the state including the regions of Vidarbha, Marathwada, and North Maharashtra.

Prime Minister will dedicate ‘Nagpur Metro Phase I’ to the nation, stated an official press release.

PM Modi will flag off two metro trains – from Khapri to Automotive Square (Orange Line) and from Prajapati Nagar to Lokmanya Nagar (Aqua line) – at Khapri Metro Station. Phase I of the Nagpur Metro is developed at a cost of more than Rs 8650 crore.

Prime Minister will also lay the foundation stone of Nagpur Metro Phase- II, which will be developed at a cost of more than Rs 6700 crore.

The hospital, whose foundational stone was also laid by the Prime Minister in July 2017, has been established under the Central sector scheme Pradhan Mantri Swasthya Suraksha Yojana.

AIIMS Nagpur, being developed at a cost of more than Rs 1,575 crore, is a hospital with state-of-the-art facilities, with OPD, IPD, diagnostic services, Operation theatres, and 38 departments covering all major specialty and super specialty subjects of Medical Science.

The hospital provides modern healthcare facilities to the Vidarbha region of Maharashtra and is a boon to the surrounding tribal areas of Gadchiroli, Gondia, and Melghat.

At Nagpur Railway station, Prime Minister will flag off Vande Bharat Express that will run between Nagpur and Bilaspur.

At the public function in Nagpur, Prime Minister will lay the foundation stone for the redevelopment of Nagpur Railway Station and Ajni Railway Station, to be redeveloped at a cost of about Rs 590 crore and Rs 360 crore respectively. Prime Minister will dedicate Government Maintenance Depot, Ajni (Nagpur), and Kohli-Narkher Section of Nagpur- Itarsi Third line project to the Nation.

These projects have been developed at a cost of about Rs 110 crore and about Rs 450 crore respectively.

The laying of the foundation stone for the National Institute of One Health (NIO), Nagpur by the Prime Minister is a step towards building capacity and infrastructure in the country under the ‘One Health’ approach.

The ‘One Health’ approach recognises that the health of human beings is connected to the health of animals and the environment. This approach appreciates that most of the contagious diseases affecting humans are zoonotic (animal to human) in nature.

The institute – to be established at a cost of more than Rs 110 crore – will collaborate and coordinate with all stakeholders and act as a catalyst to improve the research and capacity building in the ‘One Health’ approach across the country.

Prime Minister will lay the foundation stone of the project for pollution abatement of river Nag at Nagpur. The project – under National River Conservation Plan (NRCP) – will be operationalised at a cost of more than Rs 1925 crore.

The prevalence of Sickle Cell Disease in the Vidarbha region, especially in the tribal population is comparatively high. The disease along with other haemoglobinopathies like thalassemia and HbE cause a significant disease burden in the country. To address this issue, Prime Minister laid the foundation stone of the ‘Centre for Research, Management and Control of Haemoglobinopathies, Chandrapur’, in February 2019.

Prime Minister will now dedicate to the nation the Centre, which is envisaged to become a Centre of Excellence for innovative research, technology development, and human resource development, in the field of haemoglobinopathies, in the country.

Prime Minister will dedicate the Central Institute of Petrochemicals Engineering and Technology (CIPET), Chandrapur to the Nation. The institute aims to develop skilled human resources to meet the requirements of the polymer and allied industries.

“It has been the constant endeavour of the Prime Minister to provide world-class infrastructure and transport facilities across the country. In yet another step towards this, Prime Minister will inaugurate the Mopa International Airport, Goa. The foundation stone of the airport was laid by the Prime Minister in November 2016,” read an official press release.

Developed at a cost of around Rs 2,870 crores, the airport has been built on the theme of sustainable infrastructure and has a solar power plant, green buildings, LED lights on the runway, rainwater harvesting, state-of-the-art sewage treatment plant with recycling facilities, among other such facilities. It has adopted some of the best-in-class technologies like 3-D Monolithic Precast buildings, StabilRoad, Robomatic Hollow precast walls, and 5G compatible IT infrastructure. Some of the features of the airport include a runway capable of handling the world’s largest aircraft, 14 parking bays along with a night parking facility for aircraft, self-baggage drop facilities, state of the art and independent air navigation infrastructure, among others.

Initially, phase I of the Airport will cater to around 4.4 million passengers per annum (MPPA), which can be expanded to a saturation capacity of 33 MPPA. The airport will boost the socioeconomic development of the State and serve the needs of the tourism industry. It has the potential of serving as a key logistics hub, directly connecting many domestic and international destinations. It is also planned for the airport to have multi-modal connectivity.

While being a world-class airport, the airport will also provide visitors with a feel and experience of Goa. The airport has extensively used Azulejos tiles, which are native to Goa. The food court also recreates the charm of a typical Goan cafe. It will also have a designated area for a curated flea market where local artisans and craftsmen will be encouraged to display and market their wares.

Prime Minister will also inaugurate three National Ayush Institutes and address the valedictory function of the 9th World Ayurveda Congress. The three institutes – All India Institute of Ayurveda (AIIA), Goa, National Institute of Unani Medicine (NIUM), Ghaziabad and National Institute of Homoeopathy (NIH), Delhi – will further strengthen research and international collaborations and will also facilitate affordable Ayush services for people. Developed at a total cost of about Rs 970 crores, they will together increase the intake of students by around 400 along with the addition of about 500 hospital beds.

The 9th edition of the World Ayurveda Congress (WAC) and Arogya Expo is witnessing the active participation of more than 400 overseas delegates representing over 50 countries, international students and various other stakeholders of Ayurveda. The theme of the 9th edition of WAC is “Ayurveda for One Health”.

2 Arrested For Assaulting Government Officer In UP: Cops