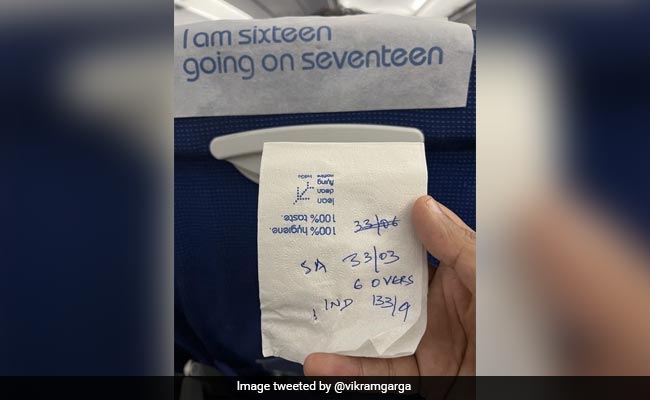 The photo of the cricket score that is going viral.

Cricket is a festival, a celebration, and an emotion to millions in the country. People find look for various ways to stay updated with what is happening in the match, especially score. One such cricket fan asked for score update from the pilot of an IndiGo flight which he was in. The pilot happily obliged and the gesture is winning hearts online. The Twitter user posted a photo of a note sent by the pilot during the flight about the score update during a T20 match between India and South Africa on Sunday. The tweet shows that the photo has been clicked onboard the plane.

The tweet, posted on October 30, is gaining traction online. It has received 373 likes and 25 retweets so far.

IndiGo too responded to Mr Garga’s tweet saying, “We’re glad to see this. We wish to see you on board soon again.”

Users called the gesture “epic” and said IndiGo deserves a shout out. Others posted smileys and thumbs up emojis to express their happiness.

South Africa defeated India by five wickets during the T20 match in Perth on Sunday. The Proteas were reduced to 24 for 3 in their chase of 134 runs in the game but a 76-run stand between Aiden Markram and David Miller helped them recover.

Markram fell soon after his fifty but David Miller stayed there till the end to finish the game.

It was Suryakumar Yadav’s 68 off 40 balls that had helped India post 133 for 9 vs South Africa after skipper Rohit Sharma opted to bat first. Lungi Ngidi had returned figures of 4 for 29.

Rahul Gandhi Refuses To Politicise Morbi Bridge Collapse Issue, Says It Will Be a Disrespect To Those killed