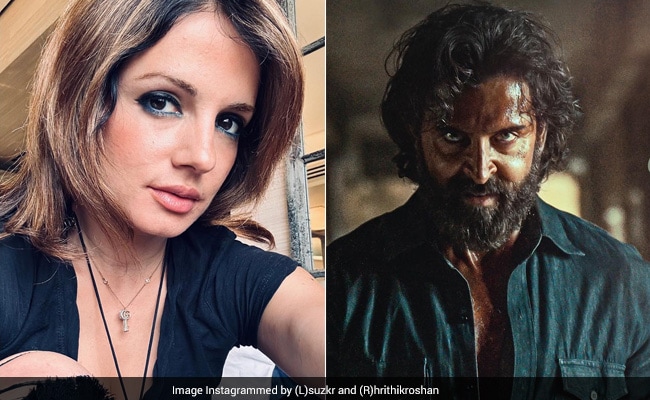 Hrithik Roshan and Saif Ali Khan’s film Vikram Vedha is just hours away to hit the theatres, and ahead of the release, Sussanne Khan has shared her reviews on the film. Calling the movie one of her “favourite movies ever,” she said that the film is going to be a “huge blockbuster”. In her note, she congratulated Hrithik, Saif and the entire team for this tremendous entertainer. She wrote, “RA RA RA RA…Rooooom this is by far one of my favourite movies ever!!! Superrrrbly gripping and full of Thrillssss!! Congratulations @hrithikroshan @saifalikhan_online and the entire team… for this tremendous entertainer!!! this one is going to be a huggge BLOCKBUSTER.” Sussanne Khan is Hrithik Roshan’s ex-wife.

Helmed by director duo Pushkar and Gayatri, the movie also stars Radhika Apte and Rohit Saraf. The movie is the remake of the hit 2017 film of the same name, starring R Madhavan and Vijay Sethupathi. In the Hindi version, Saif Ali Khan plays the role of a cop named Vikram, while Hrithik Roshan plays the role of a gangster named Vedha.

Vikram Vedha will clash at the box office with Mani Ratnam’s magnum opus Ponniyin Selvan: I, based on Kalki Krishnamurthy’s popular novel of the same name. Speaking on the clash, Hrithik Roshan, during a promotional event, said, “I haven’t read the book. So, for me, it’s just Vikram Vedha. That’s all I know,” as per a report in Hindustan Times.

Vikram Vedha will release on September 30.

Richa Chadha Offers A Glimpse Of Her Mehendi. Can You Spot Ali Fazal's Name In It?

Kriti Sanon Is Busy Exploring France With Her Parents And Sister Nupur In The New Post. Watch

Inside The Kapoor Fam-Jam With Shanaya, Maheep, Rhea And Karan Boolani