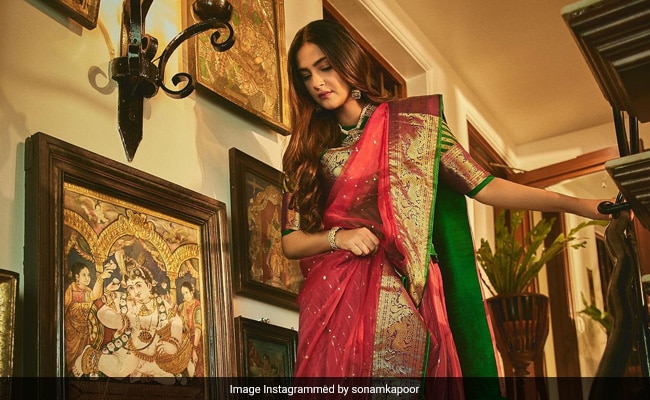 Sonam Kapoor shared a set of stunning pictures from her parents Anil and Sunita Kapoor’s Mumbai house on Friday. Sonam, in her Instagram post revealed that she doesn’t fast on Karwa Chauth but loves the dressing up bit and celebrating with family. “My husband isn’t a fan of Karwa Chauth as he thinks fasting should only be intermittent so I’ve never kept it! But both of us are big believers that festivals and traditions are a great reason for family and friends to come together,” she wrote. Sonam Kapoor’s mom Sunita Kapoor hosts Karwa Chauth festivities at home every year, which are attended by her friends. “I love that my mom loves celebrating it and I love being a part of it and dressing up. Sunita Kapoor, you always throw the best dos! Your energy and generosity is legendary and I hope to follow the same path! Happy KC everyone,” wrote Sonam.

Posting a video of herself getting ready for the festivities, she wrote: “It’s so nice to get back to the real world with my team, get dressed up and meet people… Love being back in my home ground. Love you Mumbai with all your scars and cracks you’re magic.”

Meanwhile, Sunita Kapoor shared a picture from the Karwa Chauth festivities at her home attended by Shilpa Shetty, Raveena Tandon, Maheep Kapoor, Neelam Kothari, Bhavana Pandey and Natasha Dalal among other friends and she wrote: “I’ve always believed that festivals are about belief, faith and tradition. Karwa Chauth isn’t just a day of fasting for your husband’s long life, it’s also a day for women to come together to celebrate each other. So wherever you are, and whatever your belief and faith might be, I hope you have a day filled with love, warmth and celebrations.”

Sonam Kapoor and Anand Ahuja, after dating for a couple of years, got married in May 2018 in Mumbai. They had a star-studded wedding and reception. Anand Ahuja runs the fashion label Bhane and the sneaker boutique VegNonVeg. The couple welcomed a son in August this year and they named him Vayu.

In terms of work, Sonam Kapoor had a cameo in Netflix’s thriller AK vs AK, starring her dad Anil Kapoor and filmmaker Anurag Kashyap. She was last seen in the 2019 film The Zoya Factor, co-starring Dulquer Salmaan and Angad Bedi. The actress will next be seen in the Shome Makhija’s film Blind.

Anshula Kapoor Has Found Her Foodie "Bae" In London (Pics Inside)

Easy Guess – Krishna Shroff Commented On This Actress’ Pic: “More Ripped Than Some Of Them Boys”

Oho Shahid Kapoor, Why You Do This To Mira Rajput? Watch ROFL Ad Shoot

Shakira Opens Up About “Incredibly Difficult” Split With Gerard Pique