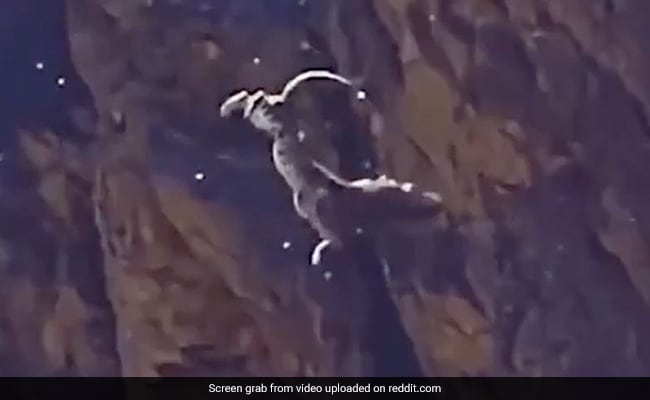 The 42-second nail-biting clip is from a documentary

An old video of a snow leopard falling off a snowcapped cliff while chasing its prey is now going viral on social media platforms. Posted by user T12J7M6 on Reddit, the spine-chilling clip opens up with a female snow leopard trying to get hold of a blue sheep. The wild cat catches its prey and soon plummets some 300 feet crashing against rocks and snow.

The 42-second nail-biting clip is from the documentary The Secret Lives of Snow Leopard. The short clip is now going viral on the internet. Along with the video, the caption read, “Snow leopard falls off a cliff while hunting.”

The video has amassed 91,000 upvotes on Reddit with 1,800 comments. A user wrote, “I saw the documentary this was in. The photographer said that the leopard walked it off, and was sore for just a couple days.” Another commented, “Holy crap that is one tenacious snow leopard.” “I think the leopard knew what he was doing. Calculated risk. Look at the way the cat rotates its body and whips its tail after slamming into the goat at full speed. That animal isn’t dumb. It saw the cliff. It is like the most nimble mountain feline hunter on earth. The leopard took the risk and turned out it was very good at math,” the third user wrote.

The fourth commented, “I mean generally speaking, cats are just naturally good at falling without much thought about it. Unless they’re super hungry or sick, intentionally taking such a massive risk like this is out of the ordinary for hunters. At the end of the day, food if you don’t absolutely need it is only worth it to a point.”

Earlier, a wildlife photographer captured a snow leopard growling at his camera. Sascha Fonseca shared the amazing shot on his Instagram account, which he took in the mountains of Ladakh.

The snow leopard uses its white and grey coat as a natural camouflage to fit into its snowy environment. It is sometimes referred to as the ghost of the mountains.

Capturing this elusive animal’s shot in the wild is a challenge but Mr Fonseca managed to capture his images with the use of a motion-triggered DSLR camera trap.